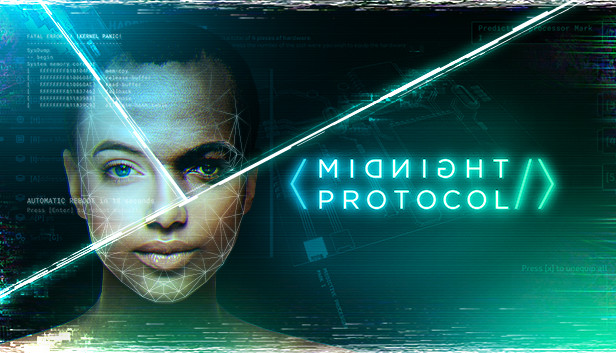 Released on the 13th of October 2021, Midnight Protocol is a turn-based RPG controlled entirely by keyboard commands. You get to step into the shoes of a recently-doxxed hacktivist, on a mission to uncover who betrayed them.

This game made me feel like a hacker from a movie. Hands flying over the keyboard at breakneck speed, with life-or-death situations erupting all around me! It’s down to me to save the day! Will I use my hacking powers for good, exposing corruption, or will I steal everything I can get my hands on?

Here’s what I thought:

How Does Midnight Protocol Work?

I’m a fast typist. I mean really fast. This means that Midnight Protocol moved at the speed of light for me, which was very exciting (although I did regret typing in haste without thinking things through a couple of times). You control the game using keyboard only, and it’s fun because it makes you feel like a technical genius without actually having to know anything about hacking.

The main bulk of the game is spent in various networks. There’s a time limit, dictated by how fast the Trace can find you. The longer you stay within one network, the more likely it is that they’ll find you, and if you do, it’s game over. You take it in turns to play against the network, with their turns becoming more complex (and combative) as the game goes on. While it doesn’t feel much like a traditional RPG, it still has the familiar element of waiting for your turn, anticipating what your enemy might do next.

Your job is to sneak in, tick off a series of goals, and then leave again. Goals vary depending on the mission, but they can include jobs like overriding automatic car controls, downloading secured data, and draining financial nodes for extra credits.

You’ll have to run programs to help you navigate the network and achieve your goals. Each program uses slices of energy, so you’ll have to be strategic in how you use them. For example, typing ‘cloak’ makes it harder for the Trace to find you, and typing ‘leech’ drains financial nodes without alerting the security systems.

If that all sounds pretty simple, trust me – it’s not. SysOp comes into play, acting essentially as Player 2. They’ll roam around the network trying to bump into you. Other ‘enemies’ get involved, like the Kraken (which leaves digital tentacles all over the connecting nodes, making it way harder to get around) and the Rook (which lines up three connections and blasts through them, meaning you’ll have to time your movements carefully to avoid getting hit).

The gameplay deepens even more as you go along. You’ll be able to spend credits on new programs, with enticing abilities. Part of the challenge is choosing the correct programs for the job, which can take a bit of trial and error. Eventually, you’ll unlock hardware too, which gives you extra slices and the ability to use more programs at once. You’ll need credits for these, which means you’ll have to pick up some side quests.

I have to admit I was a bit skeptical to start with. I didn’t know how the game was going to keep holding my interest, especially given the fairly sparse interface and lack of interaction with other characters (other than emails). But somehow, it sucked me in. There was a particular mission that I kept failing at, trying again and again, adjusting my deck, trying new routes, until I eventually cracked it. I was on the verge of giving up, but I kept going, and the payoff was really satisfying.

The premise goes like this: you’re a hacktivist (named Data), newly released from prison. You’re trying to figure out who doxxed you, and you’re determined to dig into it, no matter what the cost.

You have a couple of friends on your side giving you leads, and you can use the Intranet to undergo extra research. This comes in handy as you realise just how far deep this conspiracy goes.

The story is interesting in itself, but it wasn’t the main draw for me. What I found really effective is the fallout of the missions themselves. The stakes are very high, with life-or-death outcomes for the people involved. It adds complexity, which is needed. Just when I felt like I was typing into the void with no particular outcome, a character died due to my actions, which left me feeling shocked (and very annoyed at myself).

The missions – both the main story missions and the side quests – sometimes present you with an opportunity to make a moral choice. Do you delete the evidence of a husband’s infidelity, or present it to his wife? These decisions, small and large, contribute to your reputation, which gives you the chance to develop Data as a character.

Overall, the game does a good job of striking a balance. Your job as a hacker is, by its very nature, isolating. You work under a pseudonym, and you don’t really know who you can trust. Your only interaction with others is via text on a screen, and I started to feel lonely. But the main story events interrupt things from time to time.

The interface is pretty simple. You’re in control of a sparse computer, and you use keyboard shortcuts to get around. It’s satisfying to flick through, and the missions have a cool, futuristic vibe without being cliched.

After a while, though, I started to long for a change of scene. The main plot points and gameplay kept me coming back for more, but I found myself needing to break it up into small chunks, rather than losing myself in it for hours at a time.

The core game mechanics are excellent. Satisfying, with a decently difficult learning curve (but not too hard that you’ll want to quit completely), it’s an exciting game if you love geeking out over deep strategies. It takes a lot of brainpower (and stamina) to keep trying, but the lure of beating each mission makes it worthwhile.