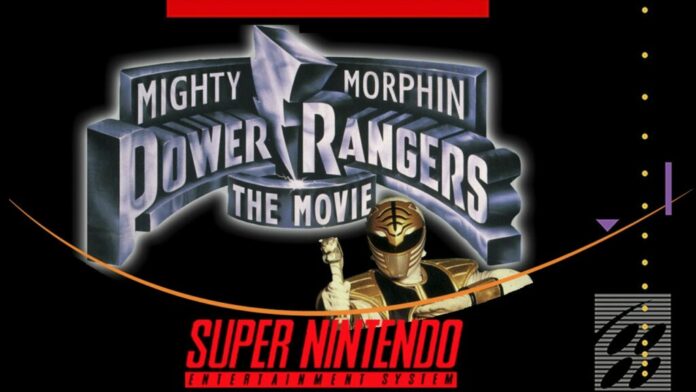 Gaming has a rich history that spans multiple decades. To this end, The Last Word on Gaming Backlog is a series that looks back on titles across all generations. From the golden 8-bit era to the landscape-changing 64-bit scene and beyond, The LWOG Backlog’s aim is history. You already know what time it is – take a look back at the movie tie-in game for the Super Nintendo: Mighty Morphin’ Power Rangers: The Movie (SNES).

During the early-to-mid 1990s, there were few pop culture staples as prevalent as Mighty Morphin’ Power Rangers. The show about teenagers with attitude, transforming into superheroes to save the world, was more than just a children’s program. Simply put, it was a phenomenon. In addition to merchandise such as action figures, the original series spawned a 1995 feature film. Mighty Morphin’ Power Rangers: The Movie grossed over $66 million on a $15 million budget, making it a success. With this movie came a tie-in game for Nintendo’s 16-bit home console.

Developed by Natsume and published by Bandai, Mighty Morphin’ Power Rangers: The Movie (SNES) was released in July of 1995, one month following the film. It was also regarded as a sequel title to the first Power Rangers game on SNES, a basic yet enjoyable side-scrolling action game. We covered the title in question this past January on Last Word on Gaming, and while MMPR: The Movie built upon what the previous game established, it also implemented other concepts to make it a successor all its own. Whether you’re experiencing this game for the first time or taking another whack at it – or quack at it – here’s what to know.

Mighty Morphin’ Power Rangers: The Movie (SNES) is loosely based on the film it represents. 6,000 years prior, a morphological being known as Ivan Ooze was overthrown by a group of young warriors, led by Zordon. In the present day, Ooze escapes from his egg-shaped prison, his goal being to take over the world with his hoard of monstrous servants. Only the Mighty Morphin’ Power Rangers, a group of 6 teenagers channeling powers from the spirits of enchanted animals, can stop his plans and defeat him once and for all.

Going into MMPR: The Movie (SNES), it’s important to remember that the game’s plot isn’t directly lifted from the movie. While certain elements carry over, including Ivan Ooze himself, others are notably absent. These include Dulcea, who provides the rangers new powers in the movie, as well as the series’ trademark Zord battles. With that said, the general story is enough to keep the game going from a narrative standpoint.

Mighty Morphin’ Power Rangers: The Movie (SNES) shares similar gameplay to its console predecessor. The game plays like a side-scrolling beat-em-up, tasking the player with fighting their way through 7 stages. However, there are a few changes to note, some more welcome than others. First, unlike the original SNES title, MMPR: The Movie allows multiplayer. Two players can team up as any of the 6 rangers, battling everything from Putties to “Monsters of the Week” taken directly from the TV show. These include, but aren’t limited to, Mirror Maniac, Cannon Top, and Magnet Brain.

It’s also worth noting the multi-plane system implemented into MMPR: The Movie (SNES). Movement and combat take place on two separate planes: the foreground and the background. The player, as well as the enemies they face, can leap between the two at any given moment. This can prove especially strategic during the game’s more high-stakes encounters, including certain boss fights. Maneuvering on a surfboard during the fight with Skelerina and evading projectiles from Magnet Brain, just to name a few examples, make for hectic encounters.

Visually speaking, Mighty Morphin’ Power Rangers: The Movie (SNES) is a mixed bag. While the game is colorful and vibrant, which was the norm for many of the console’s offerings, graphics miss the mark in certain areas. Chief among these is the Ranger designs themselves. Aside from Tommy the White Ranger, every Ranger is a palette swap of each other. This was prevalent in the first SNES game and it’s unfortunate that heading into this sequel title of sorts, unique Ranger sprites weren’t designed for every member of the team.

From an audio perspective, however, MMPR: The Movie (SNES) impresses. This was a high point of the first SNES title and it carries over to the movie tie-in game, providing an energetic soundtrack that feels in line with the source material. The game’s audio composition is credited to Haruo Ohashi and Hiroyuki Iwatsuki. The two worked together on multiple Power Rangers games for the SNES, specifically Mighty Morphin’ Power Rangers: The Fighting Edition and Power Rangers Zeo: Battle Racers. They also worked together on underrated SNES gems such as Pocky & Rocky 2 and Wild Guns.

Another area where Mighty Morphin’ Power Rangers: The Movie (SNES) falls short is its replayability. Though the game itself can be incredibly challenging, once the gameplay is fully understood, it may not take a seasoned gamer any longer than a few hours to complete it. One can argue that replayability can be gained from playing as different Rangers, though aside from slight cosmetic and weapon changes, they play the same as each other. This may not be a game that keeps players engaged after the end credits roll.

While fun can be gleaned from Mighty Morphin’ Power Rangers: The Movie (SNES), there are a few too many nagging issues for it to be considered a must-play. Multiplayer and the utilization of different planes are nice additions, but in general, the first MMPR game for SNES is the better experience. While it’s a far easier game, by comparison, it provides a better experience for the player, allowing them to fight through stages, take down enemies, and feel like a nearly unstoppable superhero. MMPR: The Movie (SNES) has its appeal, but between the two, the first game comes more recommended.