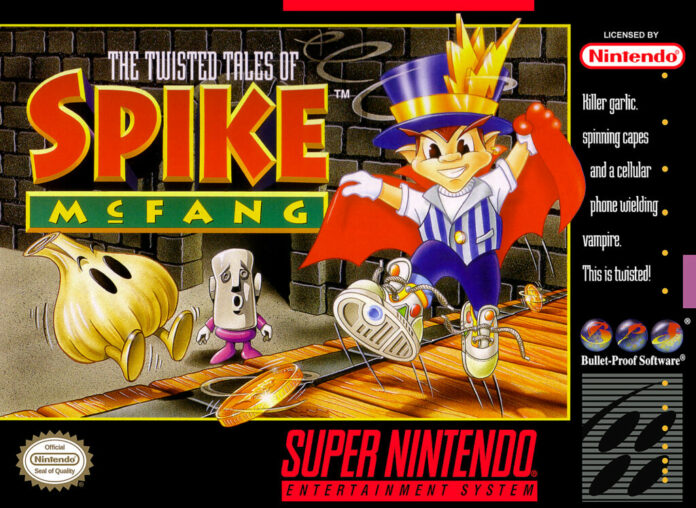 The Twisted Tales of Spike McFang is a single-player action RPG that was released for the SNES in Japan and North America. Published by companies Bullet-Proof Software and Naxat Soft, the American version was changed to increase the difficulty through tougher enemies and no health replenish after a level increase. Reviews of the game ranged from very good to very bad depending on qualities such as; difficulty, gameplay, and storyline.

A Simple Cartoonish Experience For All Ages

Spike McFang, while off on a training mission, receives news that his kingdom has been attacked and he must rescue his parents from the clutches of evil general Von Hesler. The story is very simple and straightforward, with very little to no surprises. The protagonist unites with allies in order to save the world, which is a very classic JRPG/Anime archetype. There is nothing complex about the game, which acts as a double-edged sword. Older gamers may find the experience to be overly straightforward and dumbed-down; however, younger gamers are able to have fun without the worry of adult content.

The style and animations are pulled right out of a cartoon with silly humor and comedic dialogue. Spike is the antithesis of the silent protagonist as he is heroic but silly. There is a scene where he drives off, leaving his companion Ruby to run all the way to the next continent. All three companions interact with one another during cut scenes, where they usually are poking fun at each other’s personalities.

Before Mario, The Flying Hat Belonged To The Vampire

The biggest gameplay mechanic is that Spike uses various hats to attack enemies. He throws his hat like a boomerang, with each hat having a different effect. The Lightning hat will attack in a zig-zag pattern, while the Feather hat will float around attacking nearby enemies. This mechanic is very unique and deserves credit, but there are not enough varieties of headwear to make it interesting. The basic cape attack is for up-close combat and fits the vampire aesthetic. However, the real saving grace for the battle system is the various cards you can use in battle.

Cards can be bought at shops from gold enemies drop when defeated. These cards have various effects, ranging from invisibility, health regeneration, and angels and bats attacking. There are enough cards to make it interesting, but overuse can make boss fights too easy and eliminate any challenge. Again, simplicity is a double-edged sword, you want to appeal to young gamers, but you should also want to bring the older audience as well.

The Twisted Tales of Spike McFang is a quick fun game for players who just want to pick up a controller and spend two to three hours playing. It acts as a decent time distractor and if you like cheesy, cartoonish humor then this one is for you. However, experienced gamers might find it straightforward, easy, and too childish in design. I would recommend if you have some time to enjoy the cartoon and anime aesthetics.