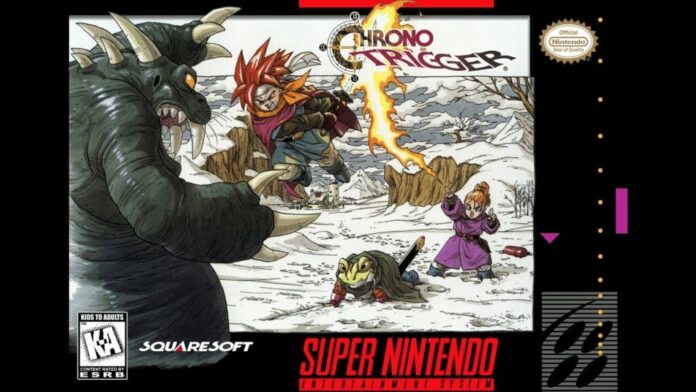 United by Fate, Separated by Time, Destined to Save the World

Beginning the morning of 1000 A.D., the Kingdom of Guardia is celebrating their historical Millennial Fair. Our young, stereotypically silent protagonist Chrono, is on his way to see his childhood friend Lucca’s new invention when he encounters a mysterious young girl. Introducing herself as Marle, she and Chrono explore the fair and end up at Lucca and her’s father invention demonstration. Tragedy strikes when the transporter reacts to her pendant, leading her to get sucked into a vortex. I do understand why the main character is silent, he is supposed to be a reflection of us the gamer in thoughts and actions. It is how we feel as part of the game, and that our choices matter.

After entering the vortex, our young hero ends up 400 years in the past, eventually finding Marle posing as that time period’s queen. After a quick reunion, she vanishes once again and Lucca explains that she is the current time period’s princess Nadia. With the help of Lucca and Frog, the Kingdom’s current protector Chrono rescues Nadia and the three return to their time period. I like that they kept the scenery the same in certain areas, with differences sprinkled in. You can see things have changed while wondering why certain things have vanished. This gets expanded later when you can really affect change but keeping consistency between time periods was really done.

Triumph turns to tragedy as Chrono is arrested for kidnapping the princess. As he is to be executed, Lucca appears for the rescue, and the three escape capture through another vortex appearing in a field. After realizing that they are now in 2300 A.D., the trio discovers that an entity known as Lavos arose from the ground and completely annihilated the future. Chrono, Lucca, Nadia, and their time-traveling companions must now traverse the past, present, and future to discover the origins of Lavos and save their future from armageddon. There will always be the one big baddie in JRPGs that threatens the world, but Lavos itself is an interesting concept. You never really understand what it is throughout the game, until the very last battle. It is just a big creature that fell from the sky and is now causing time-changing madness. That air of secrecy is fun and compelling.

Time-traveling is such a hard concept to pull off effectively and properly. I think Chrono Trigger did it extremely well for its time. I never once felt lost or overwhelmed with how or why things happen, as everything was explained throughout. My intelligence was never insulted either because the game itself kept its anime and lighthearted charm without trying to be a science lesson.

Anime Style Action and With A Side of Fun, Silly Humor

Chrono Trigger is incredibly addictive as a game. The combat is varied just enough so that the player won’t get bored. Out of the eight characters you can choose, I found myself experimenting with all of them at one point or another since they are have their unique fighting style. Ayla the cavewoman is your physical bruiser who can’t use magic for example, while Magus is your magic aficionado. I replayed the game numerous times just to see all of the double and triple combos characters could do together. Replayability is a huge factor in Chrono Trigger, which makes sense since it is a time-traveling game. The future versions took this into consideration with the 12 different endings. Also, if you’re like me and stick with the characters you find interesting, you will have little to worry about. While some characters give you slight advantages in battle, you will never feel hopeless with any combination of characters.

Attacks are rendered visually, as are magic spells. Each character is assigned an element that is used to cast aligning spells. I enjoyed seeing the different spell animations during battle, as they felt epic and not too lengthy. Some of the attacks are humorous as well, such as Frog summoning a giant frog to splat the enemies or Lucca throwing a huge grenade.

If you’re into JRPGs just for the story choose the waiting system and enemies will wait until the characters act before attacking.  The active system forces gamers to think on their feet; enemies will not wait for you to make a decision. I definitely recommend real-time as I felt more involved in the battles when I had to constantly react to the AI. It is not a highly difficult game with the active system either. It doesn’t hold your hand at any point, but you never feel lost in how to play.

What can you say about the music? Each piece fits perfectly with the environment. Wandering through town is accompanied by a simple, relaxing, and upbeat melody for you to enjoy the exploration. Fighting an incredibly difficult monster? Here is a heavy, up-tempo, and intense beat to exemplify the danger you are in. I still listen to the game music until this day, as it has become transcendent for me, from game to everyday life.

The characters give off their own individual personality. Lucca is the intellectual who sees the world methodically, while Nadia is the tomboy, bratty princess who goes against the rules. These are why gamers remember characters and get attached to them, they reflect real-life personalities even though they are anime. Their interactions with each other can provide comical situations that lighten the mood. Lucca freaks out when she sees Frog, with an over-the-top anime reaction.

Chrono Trigger is a classic masterpiece that has continued its popularity through multiple ports. The creation from the “Dream Team” has kept its charm and enjoyability, even through additional add-ons. There has been a clamor for a true sequel but whether that ever happens or not is up in the air. What it clearly demonstrates is how this game has affected the hearts and minds of the gaming community.