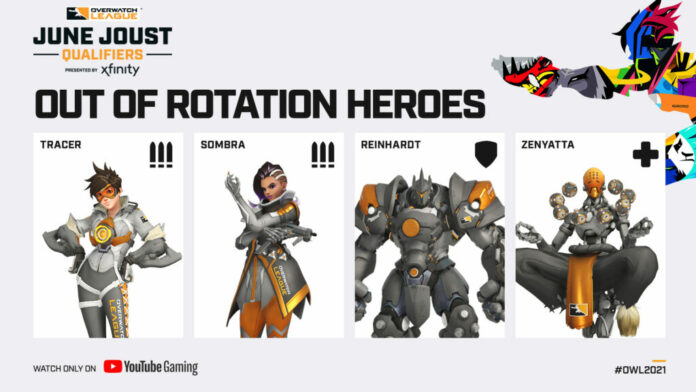 Two weeks after possibly the best set tournament we’ve ever had, the June Joust is here to quench are thirst for more Overwatch League games. Here we shall look at the introduction of Hero bans and who are the favourites for the competition.

Hero Pools were put in the plan for this year’s Overwatch League season for two of the tournaments, with the first being the upcoming June Joust.

Hero Pools do what they say on the tin – they create a pool of heroes to choose from by removing four heroes from the roster, two DPS, one tank, and one healer. This was done by the League to increase the difference in team compositions but has been met with a lot of animosity from the community, who rightly have acknowledged that we have seen an amazing level of versatility shown by the players involved, most notably SP9RK1E’s Soldier:76.

The Hero Pools for the whole of the June Joust involve the removal of Tracer and Sombra from the Damage role, Reinhardt from the Tank role and Zenyatta from the Support role. Particularly the omission of Sombra and Reinhardt, two heroes who were extremely influential in the May Melee, will result in big meta shifts. There’s also a chance that fan favourite super, a Reinhardt specialist, will not feature for the whole stage after Reinhardt’s omission.

For me, the introduction of Hero Pools is going to make the league extremely interesting. No blame should be placed on the Overwatch League as they had planned this before the season and the excellent May Melee had occurred, and it would be wrong for them to change it now. It is always fun seeing heroes like Roadhog and Sigma back in the fold, but please no Orisa…

Few are going to bet against the Dallas Fuel enacting a repeat of their May Melee win in the June Joust. Fearless’s primary hero Winston is still available, and alongside Fielder’s Ana, you have a combo that lit up the opening tournament. There is a higher chance however that hitscan heroes will be more prevalent, and Pine’s status for this tournament is still unknown meaning that Dallas could struggle if the meta shifts in that direction. But never doubt the SP9RK1E Soldier!

On the APAC side of things, the Philadelphia Fusion could very easily go 4-0, coming up against the NYXL, Chengdu Hunters, Guangzhou Charge and LA Valiant. It is then just the matter of winning their qualifier for Philly, who often struggle at that stage. But with tobi and HOTBA looking like new players since joining, I wouldn’t put it past them to make a run for the top spot.

The first tournament of the Overwatch League got me more engaged with the competition than I have ever been before. I am so excited for the June Joust and if the quality of games is even half as good as in the May Melee, we are in for a treat. Hopefully my pick’ems go slightly better this time though.