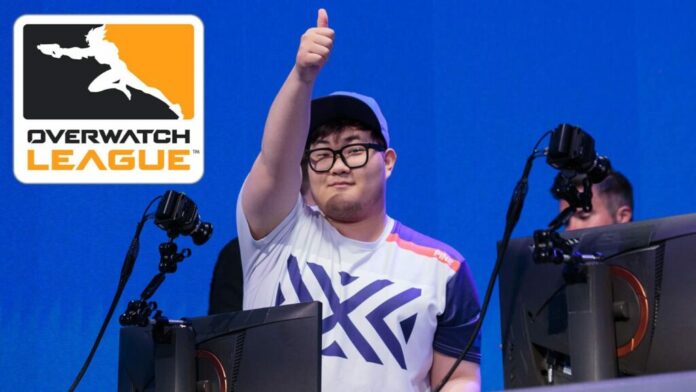 Fresh from their dominating win at the May Melee, the Dallas Fuel sign Pine, a former player of the NYXL.

Back in the Game!

The Big Boss himself, Do-hyeon Kim, aka Pine, has returned to the Overwatch League to play for the May Melee champions, the Dallas Fuel.

Before the start of the Overwatch League Season, the Dallas Fuel suffered a major loss as their star DPS signing Xzi decided to retire after a recurring back problem. This meant that they went into the season without a hitscan player.

With McCree as a must pick for many of the Overwatch League teams, many thought the Dallas Fuel curse would strike again.

Despite this, the Fuel’s non-meta comps allowed them to shock opponents in their run to the May Melee grand finals, with few teams knowing what to play to counter them. The grand finals against the Shanghai Dragons was one of the best examples of their versatility, as, when struggling on Kings Row, SP9RK1E brought out the rarely used Soldier:76, and helped lead the team to glory and give Dallas Fuel fans their first taste of success in the franchise’s history.

When Pine was first in the league, he was known for being the most clutch player. His iconic performances on the control map Ilios will live long in the memory for long-term Overwatch League fans.

Pine didn’t play every game for the NYXL and his signing for the Dallas Fuel is confusing to say the least.

For someone who hasn’t played in the Overwatch League competitive scene for a couple of years, the step up needed for Pine will be unbelievable.

Honestly however, if anyone could do it, Pine is the one who could.

The Dallas Fuel will encounter a time this year where a hitscan would help them, and we’ve even seen it in some map losses in the May Melee, where the hero pool of Doha and SP9RK1E have been exposed.

What a weekend for the Fuel, me and all other Dallas fans. I’ve been following Dallas since their days as EnVyUs in Apex and this moment was nearly as amazing as that first APEX win.

If Pine can recapture any of his form from OWL season 1, this team will go from strength to strength and dominate.