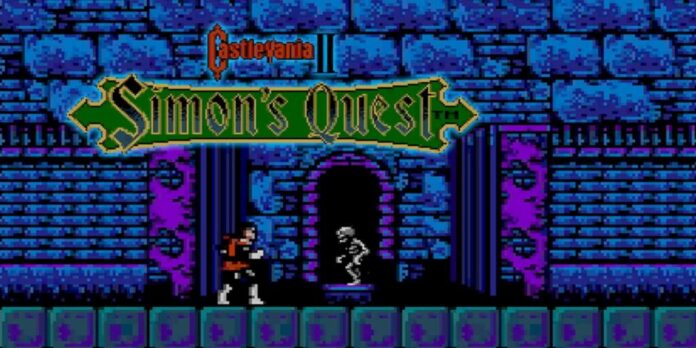 Gaming has a rich history that spans multiple decades. To this end, The Last Word on Gaming Backlog is a series that looks back on titles across all generations. From the golden 8-bit era to the landscape-changing 64-bit scene and beyond, The LWOG Backlog’s aim is history. “What a horrible night to have a curse.” It’s time to take a look at Castlevania II: Simon’s Quest for the Nintendo Entertainment System.

The original Castlevania was a landmark title for the Nintendo Entertainment System. It successfully brought a gothic sense of style and challenging sidescrolling gameplay to the NES, capturing the imagination of gamers during the late 1980s. From its visual style to its memorable soundtrack, the title was praised upon its release and it still remains a favorite among old-school gamers. It should have come as little surprise, then, that it would be followed up by a sequel. Enter Castlevania II: Simon’s Quest for NES, developed and published by Konami. It was released on the NES in 1988 in North America before reaching Europe the following year.

Castlevania NES series director Hitoshi Akamatsu returned for this project, aiming to incorporate puzzle-solving elements into Castlevania II: Simon’s Quest. Furthermore, it was determined that there would be a greater emphasis on exploration, making the second title in the main series more open-ended. Though it was received well upon its release, modern gamers and columnists judged it more critically for different reasons. Let’s take a deep dive into this divisive sequel.

Castlevania II: Simon’s Quest is a direct follow-up to the original. It stars Simon Belmont who, in the previous game, believed to have successfully vanquished Count Dracula. One day, however, he is approached by a beautiful maiden, who tells him that he has been afflicted by the Count’s curse. To remove said curse, and rid the world of the Count once and for all, Simon must find the five scattered body parts of Dracula. Only by burning them in Dracula’s castle will Simon decisively destroy the remnants of his cloaked rival.

The story of Castlevania II: Simon’s Quest is unique in that the goal isn’t necessarily to defeat a final boss. Rather, it’s to undo the evil that was left behind following the events of the previous game. This story will take Simon across a vast map as he collects Dracula’s various body parts to destroy them. For an NES game, one can’t deny the fact that the story takes a different direction. Furthermore, depending on how much one enjoys the game, it may propel them to continue playing.

Mechanically, Castlevania II: Simon’s Quest isn’t much different from its predecessor. Jumping, attacking with the whip, and utilizing different side weapons have carried out. However, one of the areas where Simon’s Quest differs is in how the game is structured. As opposed to fighting one’s way through multiple levels, the player will explore a vast map, fighting through forests, graveyards, mansions, and other locations. This is where the open-ended nature of Simon’s Quest becomes prevalent.

New to the Castlevania series, introduced in Simon’s Quest, is the day-to-night cycle. As the game progresses, a pop-up screen reading “what a horrible night to have a curse” will appear. From there, the game will shift to nighttime, where spiders, zombies, wolves, and other creatures become more challenging. While this cycle was ambitious for its time, the fact that it abruptly interrupts gameplay made it a point of contention for modern gamers. The text also scrolls at a slow pace, which doesn’t help keep the game going at a steady pace. If anything, it can make the player feel lost.

Adding to this sense of feeling lost is the game’s direction. The player isn’t left with much instruction, as far as where to go next, which can make the open world of Castlevania II: Simon’s Quest feel overwhelming. While the combat itself isn’t terribly difficult compared to other titles in the series – the boss fights, in particular, can be pushovers if certain strategies are implemented – the frustration of not knowing where to go next can turn players off. This is where the lion’s share of modern criticisms stem.

Despite its gameplay quirks, for lack of better terms, Castlevania II: Simon’s Quest excels in regard to presentation. As was the case with the original, Simon’s Quest utilizes limited colors but atmospheric detail. Forests are shrouded, mansions are filled with gothic imagery, and the world itself feels alive for a late 1980s NES romp. The enemies are also incredibly detailed, adding to the spooky nature of the game. One cannot say that Simon’s Quest is a bad-looking 8-bit title.

More memorable than its graphical style, however, is the soundtrack of Simon’s Quest. Even the harshest critics of this title can’t deny that it features a solid, memorable score. “Bloody Tears,” in particular, has gone on to become one of the most iconic tunes in the series, even being revamped for future Castlevania entries. Satoe Terashima and Kinuyo Yamashita return from the original as Simon Quest‘s composers, bringing the game’s sense of adventure to life through music.

The replayability of Castlevania II: Simon’s Quest is largely dependent on how much one enjoys the game. How enticed would a player be to not only see the end credits but play through multiple times? Keep in mind that Simon’s Quest has a total of 3 possible endings based on how long it takes a player to complete the game. A standard playthrough, preferably with a guide handy, can last anywhere from 4 to 5 hours. However, it wouldn’t be unfathomable to clock in over 15 hours to see every last ending. Simply put, replayability will vary on a case-by-case basis, though Simon’s Quest isn’t a short game by any means.

As stated earlier, Castlevania II: Simon’s Quest became more critically reviewed as time went on. Not only did they pan the game’s oftentimes cryptic nature, but its use of NPCs, most of whom provided little insight as to where to go next. Perhaps the most notable critique came in the form of the first-ever Angry Video Game Nerd episode. This video hit the internet more than a decade and a half following Simon’s Quest‘s retail release. While the second game successfully deviated from the original formula, many will agree that such a shift was unnecessary. The series would return to form roughly two years later with the final NES series title, Castlevania III: Dracula’s Curse.