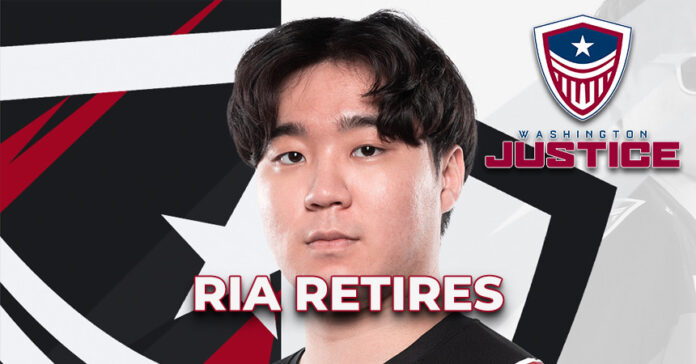 Washington Justice’s off-tank Sung-Wook Park, aka “Ria”, retires from The Overwatch League, citing a long-term wrist-injury as his motivation.

Ria first made a name for himself in Overwatch Contenders Season 1: Korea as the off-tank for X6-Gaming. Winning the competition, which is known as one of the most competitive in the whole of Overwatch, Ria, alongside many of his teammates, joined the newly founded Hangzhou Spark in the second season of the Overwatch League.

The Spark greatly outperformed expectations in their inaugural season, finishing 4th and securing an impressive $350,000 prize pool. Ria continued as a fairly consistent off-tank for another year with Hangzhou, and despite failing to maintain their initial success, Ria remained as one of the bright spots on a team that had already reached their peak.

A Move To The Washington Justice

A transfer to the Washington Justice, one of the favourites for the current Overwatch League season, gave many the hope that we would see Ria shine alongside a big roster.

But with alternate tank options like Fury and Decay, Ria would have been much better suited to a different team’s set up. His issue resided in the fact that Fury is one of the best off-tanks in the league and Decay’s Zarya last year was nuts, meaning that he was playing as the third choice option.

If there happened to be a double off-tank meta this year, we may have seen him play a few games, but it is a shame that we now won’t be able to. The wrist injury is unlikely to have helped his case as a starter either.

The response to Ria’s retirement shows what a popular player in the community he was. It is a shame that he didn’t get the chance to finish the season in a team that is tipped to do so well, but we wish him the best in his retirement, and hope to see him back in the scene in some capacity, as a coach or analyst, in the future.

How MOBAs eSports Came Back from The Dead