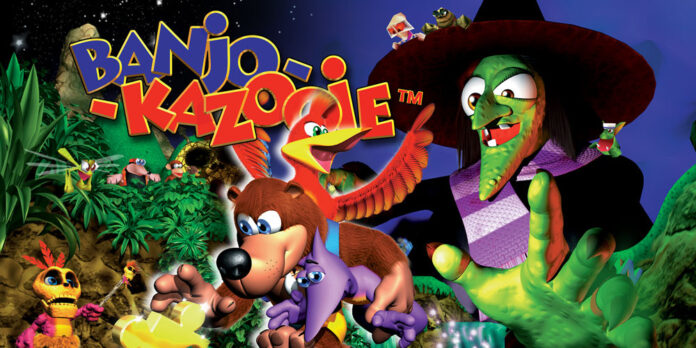 Gaming has a rich history that spans multiple decades. To this end, The Last Word on Gaming Backlog is a series that looks back on titles across all generations. From the golden 8-bit era to the landscape-changing 64-bit scene and beyond, The LWOG Backlog’s aim is history. Get ready for adventure, as we take a look at one of the most memorable titles that helped define the 3D platforming genre – Banjo-Kazooie for N64.

Banjo-Kazooie for N64 – An Overview

A Bear and Bird’s Platforming Debut

If there was one genre that was healthfully represented on the Nintendo 64, it was the 3D platformer. On the console in question, it began with the launch title known as Super Mario 64 in 1996. To say that this was a revolutionary title would be an understatement. It helped introduce gamers to a new dimension in gaming and, just as importantly, what 3D gaming could become. Two years later, the N64 would boast yet another 3D platformer worth its weight in gold puzzle pieces. Developed by Rare and published by Nintendo, Banjo-Kazooie was released in 1998 in North America and Europe.

One year earlier, the affable bear in Banjo made his first appearance in the 1997 N64 racing title, Diddy Kong Racing. Sans Kazooie, this was the first time gamers had ever seen Banjo. Development on Banjo-Kazooie for N64 began in March of 1997, the goal being to create a title that was family-friend yet deep enough for any seasoned gamer to get into. Everything from the creation of Kazooie to the development of the game’s world followed. Over two decades later, Banjo-Kazooie remains a landmark title. Let’s take a deeper dive into the bear and bird’s platforming debut.

Spiral Mountain is a peaceful land, one where the happy-go-lucky Banjo, his sister Tooty, and sarcastic yet loyal friend Kazooie, live. However, beyond the tower lurks Gruntilda, an evil witch with spells and magic for days. When Gruntilda asks her loyal cauldron, Dingpot, who the most beautiful girl in the world is, she is aghast when he responds with Tooty. In an effort to steal beauty, Gruntilda kidnaps Tooty. With the help of their friends, Banjo and Kazooie must travel into Gruntilda’s lair to rescue Tooty and put an end to the witch’s wicked plans once and for all.

The main story isn’t terribly complex, but what makes it memorable is the characters that move it forward. Whether it’s Bottles the moles, who teaches Banjo and Kazooie, or Mumbo Jumbo, who uses his own shaman magic to help the bear and bird transform, there are so many personalities at play. Their interactions take Banjo-Kazooie for N64 up a considerable notch, making the story that much more fun to see unfold.

Banjo-Kazooie for N64 is a title that fits into the unofficial genre of “collect-a-thons.” Across multiple worlds, which can be found in Gruntilda’s lair, the player must collect musical notes and Jiggies, the latter being golden jigsaw puzzle pieces, to progress. While the notes help Banjo and Kazooie venture further into the lair, the Jiggies allow new worlds to be unlocked. Keep in mind that each world has 100 notes and 10 Jiggies to collect, so across the game’s nine worlds, it would behoove the player to collect as many as possible. A one-hundred-percent run isn’t necessary, but toward the end of the game, the more that the player collects, the better their rewards will be.

There’s more to Banjo-Kazooie than the running and jumping 3D platformers are known for. Throughout different worlds, Bottles can teach the bear and bird new abilities to help them advance. While many abilities can be performed at will, others require resources, which brings an element of strategy into the game. Case and point, gold feathers are scattered around different worlds; these allow Banjo and Kazooie to become invincible. However, these feathers will deplete, and given how few and far between they are, a player must decide whether to use or save them for later.

Another element of Banjo-Kazooie for N64 comes in the different forms the bear and bird take. By collecting skull-shaped Mumbo Tokens, the player can visit Mumbo Jumbo in specific worlds, where the shaman can perform magic on the protagonists. This allows Banjo and Kazooie to take on forms with abilities that are unique to them. To cite a few examples, as a termite, the player can scale slippery slopes, while as a walrus, the player can traverse ice-cold water that would have damaged them otherwise. Banjo-Kazooie is a joy to play all the way through, but moments such as these ensure the minute-to-minute gameplay seldom becomes stale.

For its time, Banjo-Kazooie for N64 was graphically impressive. Its use of colors can’t be denied, as the game itself is incredibly vibrant across multiple areas. The character designs are nothing short of memorable, especially concerning Banjo and Kazooie. It’s no wonder why these two have become so unforgettable in the minds and hearts of gamers. Banjo-Kazooie is an imaginative-looking game, and as each world is experienced, the player may find themselves wondering what’s in store for them next. Visually, the game has shown its age over the years, but its charm remains.

Speaking of memorability and charm, Banjo-Kazooie’s sound design is top-notch. During the game, characters speak via dialogue boxes, though they are given grunts and mumbles to complement their personalities, whether it’s the “guh-huhing” of Banjo, the squawking of Kazooie, and others. Banjo-Kazooie has an incredible soundtrack as well, composed by Grant Kirkhope. Along with such titles as Goldeneye 007, Perfect Dark, and Banjo-Tooie, an N64 fan has likely heard Kirkhope’s musical work at some point or another.

Generally speaking, a standard playthrough of Banjo-Kazooie for N64 can last about ten hours. This includes the time spent exploring Gruntilda’s lair, the main hub that connects the aforementioned nine worlds, as well as collecting musical notes and Jiggies. Simply put, this is a sizable adventure, especially for those that are willing to devote time to it. However, this is only for a basic run of the game. If a player desired to one-hundred percent their adventure, there is considerable content that will keep them playing or coming back even after the end credits roll.

This goes beyond the musical notes and Jiggies found in Banjo-Kazooie’s different worlds, too. Even in Gruntilda’s lair itself, there are secrets peppered throughout, many of which must be activated in said worlds before they can be accessed. Many of the Jiggies can be challenging to acquire and finding one-hundred notes in a world, especially later on in the game, may have players combing each area for anything they missed. Depending on the time one would like to put into Banjo-Kazooie, there is substantial replayability to be seen.

Looking back over the past two decades and counting, it’s no wonder why Banjo-Kazooie for N64 stood the test of time. In fact, upon its release, critics and gamers praised it, with some considering it even better than Super Mario 64. It also became one of the top ten best-selling games on the N64, joining the likes of Star Fox 64, Super Smash Bros., The Legend of Zelda: Ocarina of Time, and others. In 2000, Rare and Nintendo would release a sequel in the form of Banjo-Tooie.

Playing similarly to its predecessor, Banjo-Tooie introduced new worlds to explore and moves to learn and execute. While some critics pointed out that worlds seemed too expansive for their own good at points, it was a worthy sequel all the same. As for Banjo-Kazooie and Tooie, both have seen re-releases. In addition to enhanced versions for the Xbox Live service for the Xbox 360, Rare Replay for the Xbox One compiled said re-releases along with other Rare classics. These re-releases saw multiple enhancements, including widescreen and the ability to retain world-specific progress, which would be lost in the N64 version if the player were to return to the Gruntilda’s lair hub.

When Microsoft acquired Rare in 2002, many gamers wondered what would become of their favorite franchises. In 2008, developed by Rare and published by Microsoft, a third console entry known as Banjo-Kazooie: Nuts & Bolts was released for the 360. With its emphasis on vehicle building and vehicle-based challenges, this was a controversial release, especially since most longtime fans of the series expected a more traditional 3D platformer. Ultimately, when it comes to games featuring the bear and bird, the original Banjo-Kazooie stands head and shoulders above the rest.