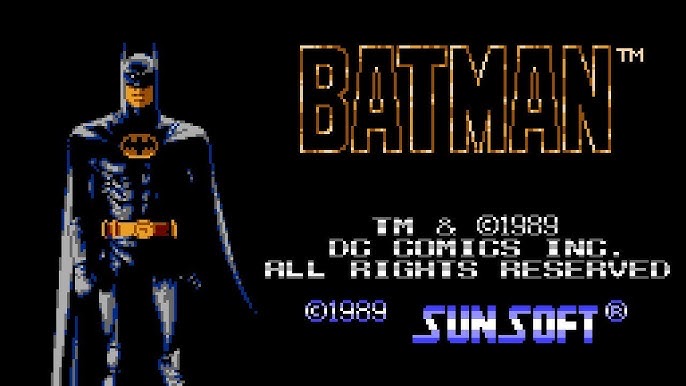 Gaming has a rich history that spans multiple decades. To this end, The Last Word on Gaming Backlog is a series that looks back on titles across all generations. From the golden 8-bit era to the landscape-changing 64-bit scene and beyond, The LWOG Backlog’s aim is history. In a sea of licensed video games based on popular properties, take a look at the challenging yet refined Batman – The Video Game on NES.

Batman – The Video Game: An Overview

“You Ever Dance With the Devil in the Pale Moonlight?”

When it comes to superheroes, Batman is among the most recognizable. Donning a black suit with the familiar emblem on its chest, Bruce Wayne has served as the silent defender of Gotham City since 1939. With a character as iconic as Batman, it should go without saying that he has found his way in multiple video games. However, perhaps his first well-regarded title came in the form of Batman – The Video Game. This particular Nintendo Entertainment System title, developed and published by Sunsoft, was released in Japan in 1989 before finding its way to North America and Europe the year after.

Batman – The Video Game was loosely based on the 1989 film featuring The Dark Knight himself. Simply known as Batman, this film was directed by Tim Burton, starring Michael Keaton as Bruce Wayne and Jack Nicholson as the primary antagonist, The Joker. As one would expect from Burton’s work, the movie featured a sense of style that must be seen to be appreciated. The film was an incredible success – many still regard it as the best Batman film – so it would make sense for a video game to be based on it. How does Batman – The Video Game hold up?

Loosely on 1989 film featuring the Caped Crusader, Batman – The Video Game places the player in the role of the titular character. The citizens of Gotham City are planning the city’s 200th Anniversary Festival. However, the festival, as well as the lives of said citizens, are in grave danger as The Joker puts his nefarious plans into action. As Batman, it’s the player’s job to traverse multiple levels, defeating dangerous criminals en route to the Clown Prince of Gotham himself.

For those that are familiar with the 1989 film, or Batman in general, this story is easy to follow. The Joker is arguably Bruce Wayne’s most notable antagonist. Furthermore, he was the main villain of the movie, which is fitting given this game’s film ties. Keep in mind that this game isn’t a one-to-one film adaptation. Despite this, Batman – The Video Game remains one of the most enjoyable licensed games on the NES, if not incredibly challenging at times.

Batman – The Video Game for NES is a 2D sidescroller with an emphasis on combat. At the start of the game, the iconic superhero has his fists, relying on hand-to-hand battle with the criminals of Gotham City. However, as the game progresses, Batman can acquire ammunition for his different Batweapons. These allow Batman to fire at long range, delivering more damage in the process. Simply put, the owner of Wayne Enterprises is seldom ill-equipped in his quest for justice.

Throughout its five stages, Batman – The Video Game will put the player’s nimbleness to the test. In addition to the aforementioned weaponry, Batman is equipped with solid jumping ability, including a wall jump that allows him to access higher areas. Players will find themselves becoming reliant on the wall jump, so it’s important to master this technique as early as possible.

The true challenge of Batman – The Video Game comes in its collection of bosses; one will be awaiting The Dark Knight at the end of each stage. Each one employs a different strategy, too. For example, while Killer Moth launches fireballs at the end of Stage 1, The Electrocutioner relies on his trademark electricity in Stage 3. These bosses give this particular game the reputation it has in terms of challenge.

Directed by Tim Burton, the 1989 Batman film was praised for many reasons, including its dark, stylish presentation. Batman – The Video Game for NES is no exception; despite its technical limitations, Sunsoft made the most of the NES. Simply put, it’s one of the best-looking games of the 8-bit area, even beyond the scope of licensed video games. The opening cinematic, which shows the Batmobile speeding down the road, is particularly impressive. Despite certain narrative differences from the movie, the game itself feels like an extension, as if Burton himself was in charge of its creative direction.

Batman – The Video Game has an energetic soundtrack that’s suitable for any superhero game, too. The first stage, which takes place in the streets of Gotham, may very well be the most memorable track. This game was composed by Naoki Kodaka; in addition to the NES and Sega Genesis versions of this game, Kodaka produced music for other Sunsoft titles including Journey to Silius and Blaster Master. One criticism is that the main theme from the 1989 film isn’t seen in Batman – The Video Game, though it’s a minor blemish on an otherwise strong 8-bit score.

Despite its challenge factor, Batman – The Video Game isn’t terribly long. In fact, it may not take a player any longer than four to five hours to reach the end credits, provided they learn boss patterns well. Once this is done, there’s not much of a reason to play again. Batman – The Video Game features nothing in the way of special stages or alternate endings. However, much like other titles during its time, it’s an experience worth revisiting once every few years.

Needless to say, Batman hasn’t been short on video game representation over the years. Even on the NES, The Dark Knight had multiple titles. One year after the release of Batman – The Video Game, Sunsoft released a follow-up title in the form of Batman – Return of the Joker. Unlike the first game, however, Return of the Joker was more in line with the Batman comic book series. It’s also worth noting that both titles had Game Boy versions, though they were vastly different from their home console counterparts.

Licensed video games, especially on the NES, carry a bad reputation. It’s easy to see why, as many titles either feel rushed or fail to live up to the source material they represent. In a sea of licensed NES games, some worse than others, Batman – The Video Game is a rare gem. While it may be challenging to a fault, the quality on display can’t be denied.