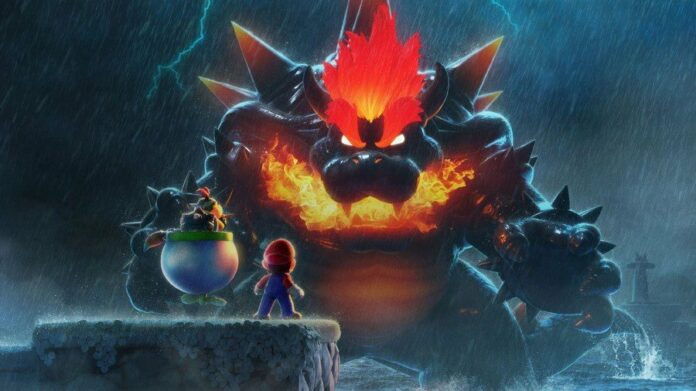 Oh my Goodness. After a long, excruciating wait, Nintendo finally dropped the second trailer for Bowser’s Fury, and HOLY CRAP is it good. I don’t want to get ahead of myself, and I also don’t want to waste too much time with the introduction. Let’s jump right into the trailer and see what this game has to offer because we have a lot to talk about.

If you missed the trailer, you can check it out over here.

The second trailer begins right where the first one left off: in a grim, rainy environment looking at some type of giant, menacing cat bell. However, unlike last time, Mario is nowhere to be seen. The camera slowly starts closing in on the corrupted cat bell, as you can see one of the lighthouses in the back right start to light up. Nintendo dropped the third trailer one day after the second, revealing this as the Giga Bell. All of a sudden, a series of focused lights presumably coming from other lighthouses breaks the corruption and releases a giant version of the cat bell from the original Super Mario 3D World. The Bell strikes a few notes, and a bright light engulfs the screen.

The light disappears, and with it, we see a lighthearted, whimsical version of the Bower’s Fury landscape with Cat Suit Mario atop one of the lighthouses. Even though the world appears to be saved, it’s safe to say that this moment takes place before the first scene in the trailer. For one, we can see that the Giga Bell is still corrupted from atop the lighthouse, and we can also see four corrupted lighthouses in the distance, shooting out some type of purple beam into the sky. Presumably, Mario will need to go to each one of these lighthouses and defeat some series of enemies prior to freeing the Giga Bell.

Of course, Mario won’t be alone. Right off the bat, Mario appears to be teamed up with Bowser Jr and his magical paintbrush from Super Mario Sunshine. This is obviously a fantastic pairing and a great throwback, but we’ll get to that later. What’s more important is the giant, ominous spiked shell in the background. This part of the trailer doesn’t tell us too much about the nature of this purple menace, but it’s obviously not good.

The next two clips of the trailer show Mario and Bowser Jr running around what appears to be the very open world of Bowser’s Fury. There isn’t too much to break down here, as this mostly falls in line with what I predicted in our earlier video on the game. Mario appears to be running around the map, dodging obstacles and doing normal platforming things to get to the lighthouses. However, something very interesting happens in the next clip of gameplay.

Mario jumps onto some vertical rotating platforms and quickly collects a cat-shaped coin. This collectible makes a similar noise to what you’d hear when collecting purple coins in Super Mario Odyssey, and the collectible itself would look more at home in that sandbox-style game than 3D World’s more linear levels.

Next, Mario is running on the island right in front of the Giga Bell. Up in the distance, we can see another cat coin, but we also see a real-life cat. I have a whole theory about these cats, but it’ll be best to explain that later. For now, just notice how this cat’s coloring and facial expression look a little familiar.

Mario won’t exclusively be wearing the Cat Suit in Bowser’s Fury, as the next two clips show our hero in the Boomerang Suit and the Tanooki Suit, respectively. We expected Bowser’s Fury to be a massive expansion, and the clip of Mario riding Plessie confirms this. We already know that this game has a lot of water and some islands, and Plessie will help Mario traverse this landscape. If this was a small add-on, Plessie’s presence wouldn’t be necessary, so this basically confirms what we already knew about the scope of this project.

The next interesting clip comes after Mario uses an ice skate to mow down baddies and make it to the end of a decently-long stretch of platforming. Mario goes to collect an item, but an invisible wall stops him from reaching his goal. Let’s ignore the wall and talk about the collectible itself. While’s it’s only on screen for a second, this looks identical to a Shine Sprite from Super Mario Sunshine, but just with a cat face on one side. The second the 2002 classic, which makes me think that these titles could be somehow connected. Additionally, in the background of this shot, we can see the giant purple shell from earlier. However, this time the shell appears to be larger and is surrounded by some sort of purple goop, similar to the malice found in Breath of the Wild.

The next few clips feature a winter theme and completely new environments, which once again show that Bowser’s Fury might just be big enough to be its own standalone title. Mario has been the star of the show up until now, but Bowser Jr finally gets his chance to shine 53 seconds into the trailer. Just like in Sunshine, Bowser Jr can use his paintbrush to actively affect the surrounding environments. We can’t see what he paints during his first time on screen, but we can see that the purple shell in the background appears to be floating into the sky, which cannot be good news for Mario.

Next, we get to see Bowser Jr defeat a Piranha Plant. It’s unclear if the cat ears are purely for looks or if they affect gameplay, but we can see Bowser Jr use his paintbrush to defeat said plant. This heavily implies that Bowser Jr will be a playable character, and not just a helpful NPC like he was in Paper Mario: The Origami King. This theory is further confirmed by Bowser Jr using his paintbrush to reveal a hidden Boomerang Power Up hidden on a wall. Unfortunately, Nintendo’s third trailer heavily suggests that Bowser Jr. will only be playable in two-player mode.

While nobody will confuse Bowser’s Fury with Citizen Kane, there does appear to be some type of story in this added mode. Even though Bowser Jr is by your side, you still don’t have the full support of all of Bowser’s minions. Mario and Bowser Jr face off against Pom Pom for a few seconds, and her boss fight seems to be the same as in 3D World, although obviously in a different environment.

Mario and Bowser finally collect one of the Cat Shines, and Mario and Bowser Jr proceed to do a celebration that feels like it’s straight out of Super Mario Odyssey. When collecting certain power moons, the game plays a cutscene of Mario and Cappy doing a small celebration. Similar animations are also present in Super Mario 64, Super Mario Sunshine, and both Galaxy games. This just adds more fuel to the fire that this game will be more of an open-world, sandbox adventure with a handful of linear platforming challenges scattered throughout.

Ok, now it’s time for the good stuff. At some point in the game, you anger the evil purple shell. The shell starts rising into the sky, shaking and leaking the purple malice (again, for lack of a better term) all over the land. The shell then rifles into the sky, and an absolutely giant, manipulated Bowser falls from the heavens, darkening the landscape as he approaches the ground. This is easily the scariest incarnation of Bowser we’ve ever seen, but it’s not the first time we’ve seen something like this. In Paper Mario, Color Splash, a dark paint engulfs Bowser, and this does remind me of that a little bit.

As the shell rises, we get a quick glimpse of Mario surrounded by four real, actual cats with very familiar colors. Have you noticed that, up until this point, the entire game has featured Mario and Bowser Jr, but none of the other playable characters? Have you also noticed that regular cats are not present in the original 3D World? That’s not a coincidence. Based on the colorings and general design of the cats, I believe that something has happened to the other four playable characters that transformed them into legitimate cats. Maybe this was a side effect of the purple malice, or perhaps this was yet another one of Bowser’s nefarious schemes. The cats appear to be showing Mario affection, which would make sense in the story of the game.

This game gets turned up to 11, as the furious Bowser’s rains hellfire down on Mario while an absolutely amazing metallic opera sets the scene. A closer look at the raining rocks shows a noted similarity to the mysterious space rocks from Super Mario Odyssey, which once again goes to show that this is more than just a simple 3D World expansion. The third trailer explains that this is not caused by any one action, and implies that Fury Bowser awakens from his rage at random intervals, and Mario just needs to evade and survive if he doesn’t have enough Cat Shines to activate the Giga Bell.

What’s even more interesting is that, to my untrained eye, Odyssey’s physics start taking over at this point. Every Mario game plays a little differently, and Mario doesn’t jump quite as high in Odyssey as he does in 3D World. Up to this point, Mario’s movements appeared to be consistent with 3D World’s physics, but that doesn’t appear to be the case for the showdown with Bowser.

More freaking awesome gameplay takes place, as Mario rides off with Plussie to avoid the giant Bowser and his breath of fire. It’s also worth noting that, for the first time ever, Bowser isn’t trying to attack Mario as a means to keep Princess Peach (or, in 3D World’s case, the fairies). As far as we can tell, this iteration of Bowser simply wants Mario dead, plain and simple.

We now cut to Mario on shore, trying to take cover from Bowser’s flamethrower. Our heroic plumber hides behind one of the aforementioned space rocks, and it breaks apart just like it did in the final level of Super Mario Odyssey. On top of that, a ring of coins emerge from the broken rock, just like they do in Odyssey. Because of this, I feel very comfortable saying that these are the same rocks and the events of Odyssey will be referenced in some way, shape or form.

The non-corrupted Giga Bell lets out a few rings, and Mario rushes to grab it. Mario does a dive which, once again, is a move straight out of Odyssey, which further supports that Mario’s physics completely change during the final fight. Our hero jumps on a Cheep Cheep, dodges some fire, and grabs hold of the giant bell.

The trailer concludes with a Godzilla-sized Cat Mario getting ready to face off with Bowser. I have nothing to add here, this is just freaking awesome and I cannot wait to play this game.

Based on the first trailer, I expected Bowser’s Fury to be more than your typical re-release add-on and feature a darker tone with a larger world. However, I wasn’t expecting this. Based on the trailer, Bowser’s Fury combines the best of all of the 3D Mario adventures into one awesome, epic, and all around stupendous experience. Call me a sucker for a good trailer all you want, but Bowser’s Fury promises to be well worth the price of admission all on its own. If getting hyped over Super Saiyan Mario fighting Godzilla Bowser is wrong, then I don’t want to be right.

Will you be picking this one up? What are your thoughts and hopes? Get involved with the Last Word on Gaming chat!