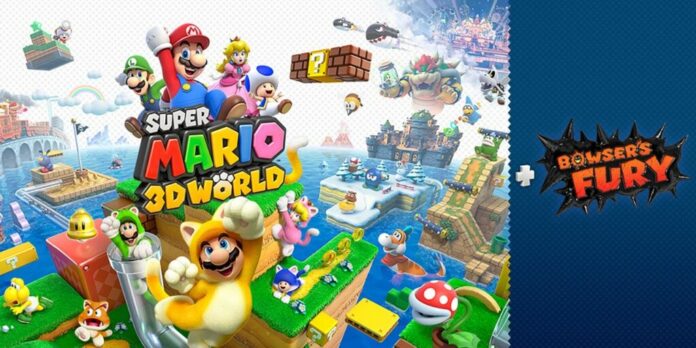 Super Mario 3D World + Bowser’s Fury is coming out in just over a month, and we still know next to nothing about Bowser’s Fury. While the 3D World portion of the game figures to be very similar to the 2013 Wii U version, Bowser’s Fury is completely new content. Outside of the reveal trailer, Nintendo has not released any information regarding the scope, story, or even the gameplay style of the new mode.

First off, let’s start with the scope. Based on the trailer, Bowser’s Fury appears to have a pretty large world. We start off with the camera panning through what appears to be some type of cat gate and going past two small islands before stopping on Cat Suit Mario sitting in front of an ominous, giant cat bell. We’ll get to Mario in a second, but let’s talk about those first two islands.

While the second island only features a tree, the first island deserves a second look. Just behind the cat gate, we see a small rocky mountain with rotating vertical platforms leading towards what appears to be a lighthouse. This obviously implies that, at some point or another, Mario will need to climb this mountain and make his way to the lighthouse.

Mario, meanwhile, sits on the third island directly in front of the cat bell with a cat gate just to the left. The island is otherwise empty, but the background gives us more insight into the potentially massive scope of Bowser’s Fury.

The island directly to the right features another cat gate, and the islands in the background feature what appears to be another mini-platforming section leading to another lighthouse. Judging by the limited view, it appears as though the cat bell to Mario’s left leads to the path to the aforementioned lighthouse. There are more islands further in the background, but it’s unclear if those are purely decorative or if Mario can eventually make it all the way to the far corners of the map.

If this is the hubworld for Bowser’s Fury, then it’s much more involved than Super Mario 3D World. While 3D World technically has a hubworld, it’s nothing more than a glorified world map. Since Nintendo put this much effort into this portion of the game, it’s safe to assume that Bowser’s Fury has a sizable amount of content. After all, Nintendo wouldn’t have done all this if Bowser’s Fury only had a few optional side missions.

Additionally, the name of the game also implies that Bowser’s Fury is more than just glorified DLC. Historically speaking, Nintendo tends to keep similar names when porting over their old Wii U games. Whether it’s turning Hyrule Warriors into Hyrule Warriors: Definitive Edition or Pikmin 3 into Pikmin 3 Deluxe, the name tends to stay the same. With that in mind, the fact that this game is called Super Mario 3D World + Bowser’s Fury instead of Super Mario 3D World Deluxe implies that Bower’s Fury can stand on its’ own as its’ own separate entity.

With scope thoroughly covered, let’s look towards the gameplay. Chances are, the gameplay style of Bowser’s Fury will be very similar to that of 3D World, albeit with a darker tone. All of the previously mentioned cat gates appear to be relatively close to the lighthouses, which probably means that this hubworld is broken up into different sections.

Mario will pass through various cat gates and perform some minor platforming to reach the associated lighthouse. Once there, Mario will enter into a more conventional 3D World level. Of course, there is no actual gameplay footage in the reveal trailer, this really is nothing more than guesswork.

With scope and gameplay taken care of, let’s move on to the story. You don’t need a detailed trailer analysis to figure out that the tone of Bowser’s Fury is going to be a lot darker than that of Super Mario 3D World. Nintendo clearly wanted to make something that stood on its own, but what is the narrative reason for such a drastic change in tone?

My not-so-educated guess is that Bowser’s Fury takes place right after the events of 3D World. For those that haven’t played the game, 3D World ends with Bowser trying – and failing – to use the Cat Suit to defeat Mario and friends. While he comes close to accomplishing his goal, Mario is ultimately able to make it to the top of a skyscraper and defeat Bowser with a POW block.

Furious that his latest plan didn’t work, Bowser decided to take matters into his own hands and craft a power up of his own. Based on the cat suit, Bowser tried to make a more powerful version of Mario’s latest tool, and ultimately ends up with the giant black bell that we see in the trailer. While Bowser succeeds in manufacturing a powerful weapon, he fails to harness its ability. The new creation ultimately becomes too powerful for Bowser to control. Now, it’s up to Mario to go from level to level and defeat whatever dark power Bowser has created.