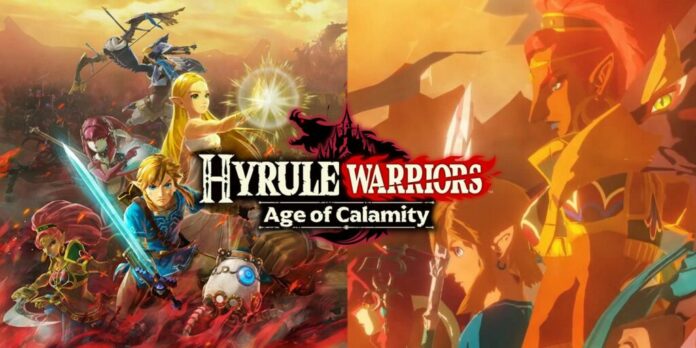 Hyrule Warriors: Age of Calamity is already the best-selling game in the Warriors franchise, and it’s easy to see why (warning: spoilers ahead). Billed as a prequel to The Legend of Zelda: Breath of the Wild, fans wanted any excuse they could get to revisit the magical land of Hyrule, and the opportunity to see a pre-calamity Hyrule was just too good to pass up.

However, the game isn’t a prequel in the truest sense of the world. Were fans deceived by Nintendo, or is this game worthy of sharing such a close connection with Breath of the Wild. Also, this isn’t going to be a review of Hyrule Warriors: Age of Calamity – we’ve already done one of those. Instead, this article will look at what constitutes a good prequel, and if Age of Calamity meets those requirements.

[SPOILERS] Is Age of Calamity A Good Breath of the Wild Prequel?

Why the Story Could Upset Fans

The game begins with a cutscene of the original timeline. In it, Zelda finally activates her long-hidden powers and, in doing so, also awakens Terrako, a time-traveling Guardian living inside Hyrule Castle. Terrako sees the damage wrought by the Calamity, and tries to go back in time to stop the events from ever occurring. However, some of Ganon’s malice travels with him, leading to the events of Age of Calamity.

Terrako establishes a new timeline by traveling to the past, which means that the entire events of Age of Calamity have no effect on what happens in Breath of the Wild. Instead of a prequel, Age of Calamity provides more of a “what if” scenario. Even though Nintendo never explicitly stated this was a true prequel to Breath of the Wild, the marketing heavily implied that it was.

Why Fans Shouldn’t Be Mad

Receiving a true canonical prequel to Breath of Wild would’ve been nice, but Age of Calamity gives more than enough to satisfy Zelda fans. For one, Age of Calamity’s early timeline isn’t that different from Breath of the Wild’s. When Terrako first enters the past, Hyrule is gearing up for a massive war against Calamity Ganon. The Guardians and Divine Beasts are ready to assist in the battle, Zelda needs to awaken her powers, and the four Divine Beasts need champions. Terrako’s presence has no effect on this – all he does early in the game is show Zelda and company that Calamity Ganon will rise sooner rather than later.

One of the biggest draws in the Warriors series is the ability to play as a wide variety of characters. Going into the game, fans expected to play as Link, Zelda, Impa, the four champions, and perhaps a few other surprise characters. However, diverting the timelines and bringing Breath of the Wild’s champions back to the past creates for some fantastic gameplay and fanservice.

Everyone loved Sidon in Breath of the Wild, and Age of Calamity gives players a chance to control everyone’s favorite Zora. Additionally, seeing Sidon reunite with Mipha in this alternate timeline was one of the greatest moments in the game, at least for those that also played Breath of the Wild. This was far from the only enjoyable moment between two generations of champions, as Teba’s idolization of Revali created several entertaining moments.

On top of that, creating a separate timeline allows for Link and company to see more of Hyrule. In the original timeline, all four champions fall shortly after the Calamity begins, while Link suffers near-fatal wounds at Fort Hateno. In this timeline, all four champions survive and actually defeat the Calamity. This allows for an entire level at Akkala Citadel and a final storming of Hyrule Castle. These are some of the best levels in the game, and they wouldn’t have been possible if the game took place in the original timeline.

While fans might be initially disappointed with the timeline divergence, the fact of the matter is that this decision made the game a whole lot better. The developers stayed true enough to the original timeline, so fans of Breath of the Wild have a pretty good idea of what happened all those years ago. However, by diverging the timelines, the developers allowed themselves to create more playable characters and better levels. Ultimately, it’s a perfect win-win for both the gameplay and the lore.