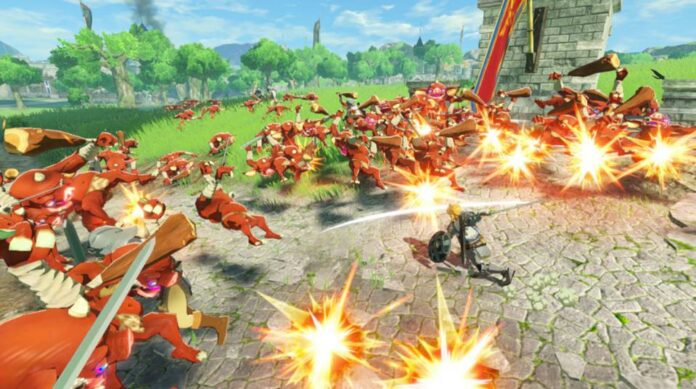 Hyrule Warriors: Age of Calamity takes us back to Hyrule and familiar sights of The Legend of Zelda: Breath of the Wild. Breath of the Wild released alongside Nintendo’s hybrid system back in 2017 and has been voted one of the best games of all time in numerous polls since. We know that Link and Zelda are to return in the sequel to Breath of the Wild but until then we are going to journey back in time.

100 years before BOTW, the land of Hyrule is in great danger and only Zelda and Link, along with the likes of Mipha and Daruk can save the day. I am not going to reveal all of the characters here because this game has a story that I do not want to spoil! Well, not too much anyway!

Koei Tecmo and previous title Hyrule Warriors, was a crossover but Age of Calamity is a direct prequel and you will recognise your surroundings right from the start. The Great Calamity will be familiar to Zelda fans and the story is one that will intrigue and delight.

Whilst the game appears to be open world, do not be fooled as looks can be deceptive. Where in BOTW you could go pretty much anywhere and everywhere you cannot do that here. It does not detract from the game too much although it can be frustrating when trying to jump onto a bridge only to find you have take a longer route round.

Age of Calamity is very much a hack and slash title. You will need to plan ahead though and as you gather your team of heroes, you can manage them on the map to go to areas ahead of you or to the rear to ensure that the bad guys are dealt with. At first this feels unimportant but as you progress further you will need to use this to the best of your ability.

Stalmoblins , Blue Moblins, Lynels and Electric Chuck are all back to try and stop you in your tracks.

Fighting mechanics such as the flurry rush from BOTW make a welcome return here. You collect food items on your journey which can be used ahead of battles to add more damage or protect you from damage out in the field.

You can switch between characters and will need to make the most of each ones unique abilities.

Getting the chance to control the four divine beasts, Vah Rudania, Vah Ruta, Vah Medoh, and Vah Naboris , is a great bonus and gives you a feeling of great power over Hyrule.

Controls are easy to pick up with the standard Musou style. Mainly you will use X and Y to attack but with ZR you can unleash a special attack. You can also detonate remote bombs and weakness attacks that all add to each individual characters armoury.

As I mentioned previously, the look of the game is very much based on BOTW. There are certain frame rate drops when there is a lot happening on screen but not as many as were in the demo version and they do not interfere with play. Scenery can be occasionally glitchy with some pop in but overall this is the Zelda look we have become used to and overall it looks good enough.

This is the by far the weakest part of the game. The screen is blurry and the frame rate drops at times to the point of being unplayable. Until a patch comes along I would avoid this for now.

Video game music gets better and better. The orchestral arrangements in Age of Calamity are superb. Trumpets blasting as you head into battle as well as full harmonious melodies. I would expect the music here to be nominated once more for a gaming BAFTA. Music in Zelda games has always been considered to be of the highest quality and here it is no different.

Whilst hack and slash might not be everyone’s cup of tea, Hyrule Warriors: Age of Calamity is a must buy for Zelda fans. It may be a prequel but you need to have played BOTW first. If you have done so and you pick this game up you will know what I mean. You will get a back story to BOTW and trust me when I say this is one game where you will not be skipping the cut scenes.

The game is huge and will keep you playing for hours on end. Yes, there are the odd flaws but overall this a welcome addition to the Zelda family that I highly recommended to anyone with a Nintendo Switch. This is gripping and enjoyable and it has enough variety to keep you coming back for more!

The LWOG Backlog: The Legend of Zelda (NES)