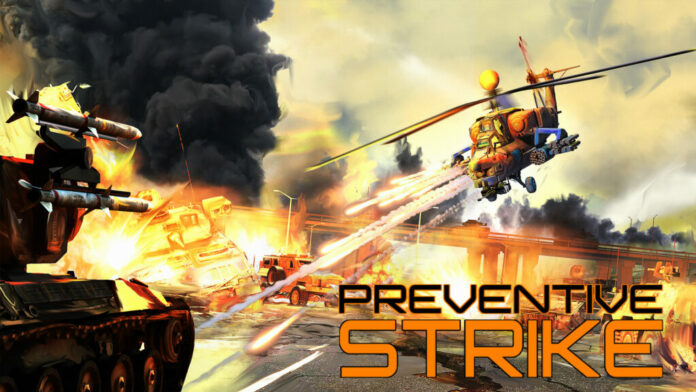 Bargain Corner makes its return as we once again searched the Nintendo Switch archives and found a game worth just 1.79 euros on the eShop.  The game is SimFabric’s Preventive Strike which is advertised on their own website as “A dynamic arcade shooter. The game is played in an isometric projection, which distinguishes the game from the top or side view typical for this genre and adds depth to the presented world.”.  The 2019 release may be the worst game we’ve played in this series, even worse than Valentina.

The game is as advertised a not-quite-top-down shooter where your aim is to get a high score and complete the level.  The only issue is that the game is ridiculously difficult.  At every point, you are swarmed by at least four different types of enemies with no real way of killing more than one which means the others are free to deal damage at will.

Getting more than five minutes into a level is basically impossible as the incoming bullets are often hard to make out and your helicopter is so big that evading all attacks isn’t easy.  Don’t get it wrong, we understand the game is meant to be difficult but there’s a fine line between “one more try and I can do it” difficult, and “how is this even possible” difficult.

With the absurd difficulty it’s not very playable.  The game controls well but it’s not enough to overcome the difficulty.

Not a chance, we’ve already deleted Preventive Strike from our Nintendo Switch and never intend on downloading it again.  Even for such a low price this game just isn’t worth it unless you’re a sadist who enjoys dying within the first minute of starting a level.  If you want a game that’s challenging yet playable get a game like OkunoKA instead of this trip to hell.