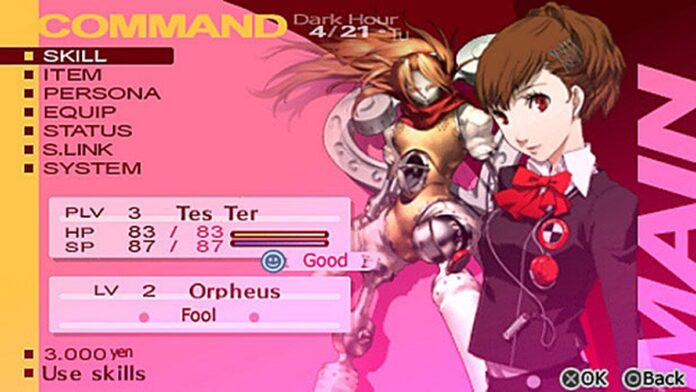 The first full moon boss in Persona 3 Portable is the Priestess boss. While far from the toughest boss in the game it is no doubt one that should be treated with respect or it’ll get one over on you. In this Priestess boss guide, I will be looking at the boss level, recommended player levels and other weaknesses and tips to beat the shadow.

The Priestess arcana does not have any weaknesses to exploit. It is strong against light and dark attacks while repelling Ice attacks entirely. Sticking with attacks that aren’t nullified should make this one work out pretty simply.

For support, the Priestess summons the Muttering Tiara shadows which are weak to Ice and Wind. If you can exploit those weaknesses to chain together attacks it will make this boss fight even easier.

The Priestess boss is a level 10. Is it recommended that you enter this fight with teammates or some persona at the same level of the boss as the timer and support makes it tough to beat the boss before the clock runs out.

There is no optimal lineup this time around as you’re limited to the original trio for the battle, which means they’re adequately equipped to win.

It is best to bring a persona that is immune to Ice attacks and one that can undo the effects of Marin Karin and Pulinpa to maximise each turn you get. Also, be sure to bring personas with Ice and Wind attacks to take down the boss’s support as quickly as possible.

What do you think of our Priestess boss guide? Chime in and let us know