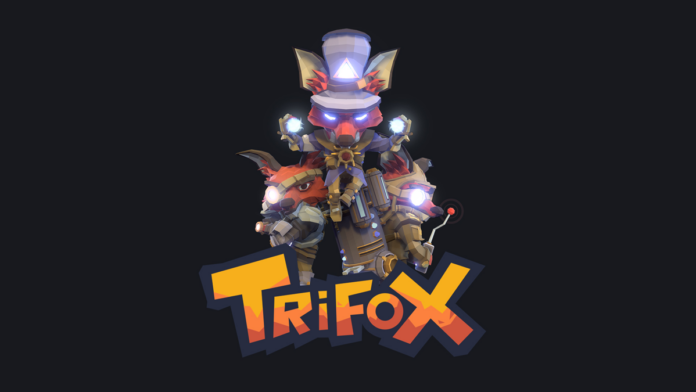 I had the pleasure of getting to play Trifox on the Nintendo Switch. The game grabbed me initially through its art style and the inventive ideas on display. In this trifox review, I will be talking through some of the positives and negatives of the game and whether or not I feel the game lived up to the promise it had.

Trifox brings a lot to the table for the gameplay. Its core is in the action-adventure style gameplay while keeping the platforming to a minimum generally. The emphasis of the action gameplay is on the loadout system that allows me to pick up to four weapons and one movement ability to take with me to the battlefield.

Each weapon has its positives and negatives, some are defensive-minded, some are powerful but have a short shelf life, others are ranged, some are close combat. The aim is to find the best possible loadout to get through each level and its array of enemies.

I think this is a great idea and base for a game but I also believe Trifox doesn’t go far enough with it. I found a loadout that worked for me very early on and I never really felt pushed to change it. In fact, the one time I did make a change it was to my detriment and I switched right back. I’m not saying that the game needed to push me to my limits but different enemy types forcing me to make changes would’ve made use of the various weapons and abilities available.

In some ways though, it’s a good thing the game didn’t push me because some levels are quite lengthy and there’s no way to change your loadout mid-level so finding out 20 minutes in that my weapons weren’t optimal for that level would’ve been infuriating. If there is a Trifox 2 or a similar game I’d like to see teleportation used to offer me a chance to change my tools around just before a big battle or boss.

I haven’t really touched on the platforming yet and that’s for good reason. It’s mostly secondary and not all that fun. I think the game controls quite loosely to play into the frantic action on the battlefield which works to its detriment when it does require precise platforming. This is one of my main grips with the gameplay because exploration is encouraged but the poor controls put me off attempting any exploration.

One major issue I had with the gameplay is that the enemies never felt that tough. The only way the difficulty was ever spiked was by sending absurd waves of enemies my way. I feel like a game as creative as Trifox could’ve done a lot more to keep me on my toes rather than just spamming enemies for me to kill.

I’ve already touched on the length of some levels and I would’ve liked to see some levels split in two instead of taking me over twenty minutes to play through. I don’t mind the time commitment but I would’ve preferred more levels with snappier timing than fewer levels with some being too long.

Gameplay aside I adore the art and presentation of the whole game. The level-select portals remind me of an old Crash Bandicoot game and it’s clear to see the effort and care that was put into producing the environments.

The weapon select portion is one of my favourite things, moving from switch to switch and assigning different abilities to different buttons is great. The video screens showing what’s assigned and a brief clip of what each ability does are nice additions too.

To say Trifox has a “story” would be a very loose definition of the word but I found myself being brought from aim to aim quite easily. A little cutscene showing news coverage of a specific bad guy was all I needed to know who my target was, and the game often made sure I saw them throughout a level, building steadily to a final confrontation. It was nothing ground breaking but it was enough to keep things ticking.

The levels themselves are also quite interesting. While Trifox starts out plain and standard the levels grow in intricacy and scale as time goes on. By the final levels, I was in awe of the landscapes I was blazing through.

It’s not often that I give something like this it’s own heading but it felt earned here. Trifox was such an audibly pleasing game. From the noise of my machine gun firing off rounds, to the clink of pots as they took damage, the little ping coins made when I picked them up, and even the noise of footsteps on a wooden surface there were so many amazing sounds that deepened my sense of actually being in the game.

The game often had nice music playing in a level too but it was the little sounds that really blew me away. I could collect coins for days and never get sick of the sound that plays as I pick them up.

I don’t think any number grading could ever fully translate my thoughts on Trifox. It’s a game that does so much right and stands out in the action-adventure genre as one of the more well-designed and creative titles I’ve played in a while. Despite that, there are just too many small things that hold it back from reaching its full potential.

I would love to see this team get another swing at a Trifox game, a tightened-up sequel could be a contender for best indie game of the year, but for now Trifox stands as a pretty good game, but one limited by its own faults.

Do you agree with our Trifox review? Leave your comments below and let us know your thoughts!

Stay tuned to Last Word on Gaming for all the latest gaming news and reviews!