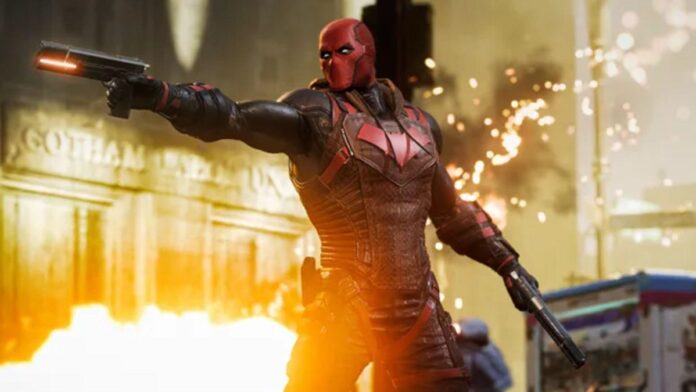 Gotham Knights are set for a highly anticipated release on the 25th of October and DC has teased fans with an impressive character trailer for Red Hood. The superhero, also known as Jason Todd, is just one of four playable characters in the video game. Players can also assume the roles of Nightwing, Batgirl, and Robin as they explore the open world of Gotham City in this action RPG.

Hopes have been high for the video game since the initial global release date of 2021 was delayed, but users of Xbox One, Xbox Series X/S, PlayStation 4, PlayStation 5 and PCs can now rest easy and look forward to its imminent release.

Each character in Gotham Knights has their own strengths and skill sets, which will be vital as the death of Batman means it is now the responsibility of the remaining members of the Batman family to save the fictional city of Gotham. The teaser trailer demonstrates that Red Hood’s strengths lie in close combat, while Robin aka Tim Drake specialises in stealth. Barbara Gordon, whose alter ego is Batgirl, is proficient in various fighting styles such as jiu-jitsu, while Nightwing, the fourth member of the group, also known as Dick Grayson, is a master of acrobatics and uses his dual escrima sticks to defeat his foes.

The action roleplaying game, developed by WB Games Montréal and published by Warner Bros. Interactive Entertainment, can also be played solo or by teaming up in the two-player mode, giving players the opportunity to help each other to complete missions.

Another innovation in the game is the level-up feature, which means when you take part in a solo mission the other superheroes do not remain inactive, they also level up with you. This is particularly beneficial when you switch characters. Fleur Marty, the Executive Producer at the Canadian video game developer WB Games Montréal Inc., explained that this feature is vital for the narrative of the game: “Since the story progression is shared between all the characters, it also makes sense that you don’t have to level them up from scratch every time you want to switch.”

Another feature is that the characters use the Belfry as a base during the day to plan missions and each night when they leave the Belfry, the game automatically moves forward in time to the night stage.

A wealth of Batman video games

Batman, who made his first appearance in Detective Comics back in 1939, has featured in countless video games over the years, beginning with the 1986 title, named not surprisingly Batman, which was released by Ocean Software on Amstrad and the Sinclair ZX Spectrum.

Video game releases on the Nintendo Entertainment System, Game Boy, Sega Mega Drive and SNES followed in the early 1990s, with the first PlayStation title Batman Forever: The Arcade Game appearing in 1996. The early 2000s saw a wide range of Batman titles, such as the 2003 beat ‘em up Batman: Rise of Sin Tzu, as the PlayStation was challenged by the Xbox, with PC games released on Microsoft Windows.

Making full use of the latest technology

The first mobile phone game was released in 2005. Batman Begins was a tie-in with the 2005 film of the same name. In 2008, The Dark Knight: Batmobile Game provided a taste of the possibilities afforded by the iPhone, which was launched the previous year, making full use of the touchscreen and orientation-sensor technology.

As mobile technology advanced, the games moved with the times to take full advantage of developments in processing power and screen size with games such as the 2011 game Batman: Arkham City Lockdown, which was released on iOS and Android.

Not surprisingly, Batman is also a popular theme in other areas of the entertainment industry, such as the iGaming sector. There are slot titles such as Batman v Superman Dawn of Justice, which can be found on the best slot sites in the UK such as Paddy Power Games. The slot game is based on the 2016 film, which saw the Caped Crusader take on Superman in an epic battle for supremacy.

The film starred Ben Affleck as Batman and British actor Henry Cavill as Superman. The game title gives fans the best of both worlds by combining the two popular superheroes in one slot with a third making an appearance in the form of Wonder Woman. The popularity of the Batman theme in entertainment has helped contribute to the success of this slot title.

The eagerly-awaited Gotham Knights are set for imminent release and the official Red Hood character trailer will have whetted the appetite of fans of the hugely successful Batman game franchise. WB Games Montréal has come up with plenty of innovations to ensure that players get full value out of this game release, even without the presence of the Caped Crusader himself.

When Will Grand Theft Auto 6 Release?