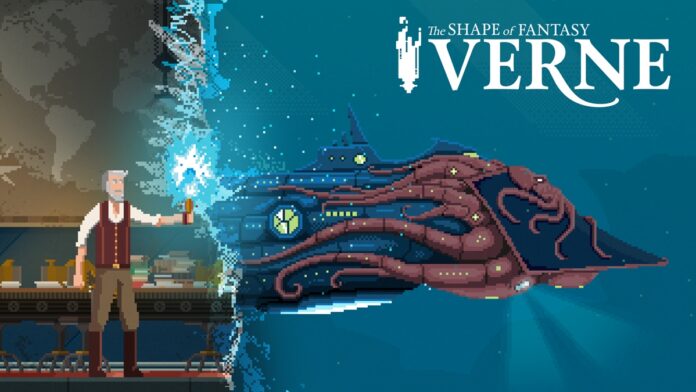 Don your scuba gear and metal detector because it’s time to unlock the mysteries of Atlantis once and for all in Verne: The Shape of Fantasy, a pixel art adventure game coming to Steam in 2023. From publisher Assemble Entertainment and developer Gametopia, Verne: The Shape of Fantasy shakes up the puzzle platform genre with an adventure based on one of the most epic tales ever told.

Verne: The Shape of Fantasy Releasing in 2023

Verne: The Shape of Fantasy is a narrative-driven experience based on the real-life works by Jules Verne, the author most famous for novels like Journey to the Center of the Earth, Twenty Thousand Leagues Under the Sea, and Around the World in Eighty Days. Leveraging Verne’s one-of-a-kind storytelling and science fiction prowess, Verne: The Shape of Fantasy delivers a magical gameplay journey where players encounter many friends, villains, and deep-sea monsters of legend.

Set in an alternate 1888, the war against the dreadful “Nation” has reached its breaking point, devastating the land of Hemera, the fantastical world created inside the mind of Jules Verne. Aboard the mighty Nautilus, Jules Verne, Captain Nemo, and the courageous crew struggle to uncover the secrets of Atlantis, the fabled utopia that faced mass destruction from the very power source Verne and his crew aim to locate: the Flame of Hephaestus.

“Jules Verne’s fantastic novels and their impact have transcended decades, and we’re thrilled to honor these incredible tales by reimagining them as interactive experiences where players can decide what happens next,” said Diego Adrada, CEO and Lead Developer at Gametopia.

Key Features of Verne: The Shape of Fantasy: