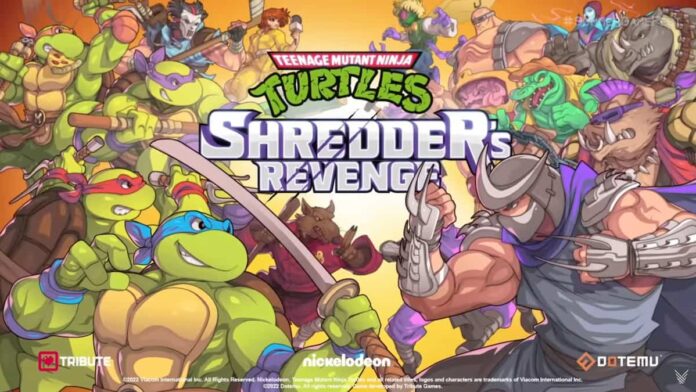 Starting today, players can take an arcade-style spin with a nostalgic twist as Teenage Mutant Ninja Turtles: Shredder’s Revenge is now available. This side-scrolling beat ’em up, inspired by the long-running franchise and its 1980s animated TV show in particular, was first announced in March of 2021. Since then, news and trailers alike were shared and it quickly became evident that this title would be a love letter of sorts to the classic TMNT games of generations prior. TMNT: Shredder’s Revenge, developed by Dotemu and published by Tribute Games, is available on Xbox One – Game Pass included – as well as PlayStation 4, Nintendo Switch, and PC.

What to Know Regarding Newest Teenage Mutant Ninja Turtles Game

Teenage Mutant Ninja Turtles: Shredder’s Revenge is an arcade-style beat ’em up title that’s reminiscent of TMNT titles such as the 1989 arcade cabinet, Turtles in Time, and The Hyperstone Heist. While it can played solo, Shredder’s Revenge focuses heavily on local and online multiplayer alike. In fact, when online, six users can play simultaneously. Furthermore, in addition to the four classic turtles – Leonardo, Raphael, Michelangelo, and Donatello, Master Splinter, April O’Neil, and Casey Jones will also be playable. Each character has their own distinct fighting style, including super moves, and set of characteristics.

TMNT: Shredder’s Revenge can also be played in two modes: Arcade and Story Mode. Arcade Mode is in line with classic TMNT titles of its kind, providing the player with limited lives and requiring that the game be completed in one sitting. Meanwhile, Story Mode allows players to collect points that can be redeemed for health, extra lives, and additional techniques. Story Mode also seems to boast more replayability, featuring challenges to accomplish and collectibles to seek out.

Between Shredder’s Revenge and The Cowabunga Collection set for release later this year, TMNT fans won’t be starved for gaming content in 2022. This upcoming arcade-style outing has been nothing short of promising since gameplay footage was first revealed. Not only does it look and feel like the TMNT arcade-style games that players enjoyed in years past, but additions such as voice acting from the original cast of the 1987 TV show are further indicative of the effort put into this title. Based on early reviews, TMNT: Shredder’s Revenge may be one of the sleeper hits of the year.

Are you excited to try Teenage Mutant Ninja Turtles: Shredder’s Revenge on day one, or are you waiting to give the turtles’ newest adventure a spin?

SpongeBob Cannot Topple Last of Us 2 Atop of Gaming Charts

The Legend of Zelda: Skyward Sword HD for Switch Confirmed