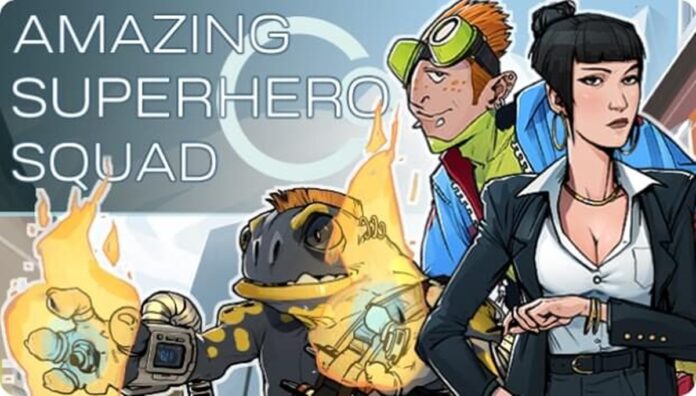 Let’s Get Down To Business

In the interest of not wasting anyone’s time, I’m going to dive right into Amazing Superhero Squad and its core mechanics. After a brief cutscene, I was thrown into an office where I had the ability to hire and fire various heroes, choose who to send on missions, choose what missions to take (an important skill), balance the public perception of heroes with cash flow and governmental support, all while dealing with a hacker leaking data and smearing the corporation. It’s A LOT. I found myself almost immediately overwhelmed by how much was going on and even got a game over on my first playthrough as the first few days were messy to say the least.

This is one of the biggest issues I had with the game. It does a lot and I would argue that it isn’t able to balance everything. As soon as I got used to the pace of the game and figured out how to navigate the menus properly (more on that later) I strolled to the finish because everything was too surface level and easy to ever challenge me. I’m not exaggerating when I say that as soon as I got my bearings with the game I had all four key measurements maxed out and never came close to failing for the remainder of the game.

Despite being what I would consider easy this core gameplay was interesting and I never considered putting the game down for its (admittedly short) run time. Maybe I’m just a sucker for a simulation game but I did enjoy the actual gameplay a lot.

Before I go into anything too negative I do want to highlight the strengths of this game. The art is very well done, it’s clear that the developers had a style in mind to fit the vibe of the game and they went with it. The photos shown at the end of every day with images from the missions were always well done and had a lot of charm to them. Some of the superheroes also had excellent designs! Even the cutscenes, as brief as they were, were animated quite well in their own distinct style.

The game itself also has a very interesting premise. Mixing superheroes into the management/simulation genre was an intriguing direction alone but adding in extras like the aforementioned government backing or public support had the potential to add another layer of interest to the game. Being a mysterious figure pulling the strings at a highly powerful hero organisation is a premise that guarantees fun.

Ultimately, I do believe that Amazing Superhero Squad attempts to do too much. This comes at a cost. For one, the user interface is not great. There’s so much happening on this one tab of a computer on my already small Nintendo Switch screen, it was chaos. Trying to navigate just from the hero menu to where the reports wasn’t even all that simple. Loading up a small screen on only one side made navigating the screen feel like a chore sometimes. The kicker is that (to my knowledge at least) there is no touch screen compatibility which would’ve no doubt made life easier for Switch players like me. Luckily there are quick button prompts that will open the hero shop menu and allow you to send heroes on a mission to mitigate some of those issues but I’d still prefer if the game just had a better user experience.

The same issue applies to the story of the game. There’s so much happening that the interesting story gets a bit lost and feels disjointed at times.

Amazing Superhero Squad is a fundamentally enjoyable game but it gets in its own way at times. An unfriendly user interface, steep learning curve, and a poorly told story prevent it from reaching its full potential. Adding in the fact that the game was quite buggy throughout my playthrough and its tough to really recommend this game to anyone.

Leave your comments below and let us know your thoughts!
Do you agree with our Amazing Superhero Squad review? If so chime in below!
Stay tuned to Last Word on Gaming for all the latest gaming news and reviews.

Why are missions being ignored