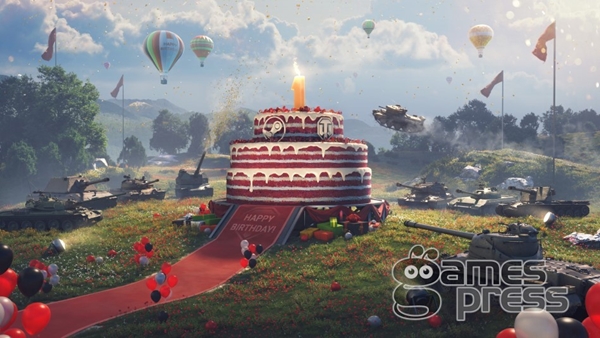 It’s true when people say that time flies when you’re having fun. World of Tanks has been live on Steam for one whole year already and that means it’s time for the anniversary party. From May 13 through May 23rd Steam players can participate in the Anniversary Giveaway, have fun during in-game activities and get the free DLC with the Cromwell B; which is an absolute iconic British Tier VI tank.

Are you ready to party and play matches with 160 million other players?

Since the launch on Steam, millions of regular PC players were, for the first time, able to join via Steam and be able to play side by side and against each other via cross-play. All players can master five different vehicle types with 11 different nations and over 600 vehicles, explore unique maps based on fields and cities from all across the world and perfect their skills in different game modes that will challenge their teamwork or individual tactics.

Thanks to its loyal fanbase of tankers, the game has also won 4 Golden Joystick awards and two Guinness World Records for the most players simultaneously logged on to an MMO server.

Watch the launch trailer in the Queen’s English

Get a Free DLC with the Cromwell B!

There can be no birthday party without birthday presents and that is why Wargaming decided that everyone who is joining the festivities via Steam is getting a free Tier VI British Cromwell tank.
The famous British Cromwell tank is super fun to play with because of its decent speed, manoeuvrability and rapid reload time. Tankers can outmanoeuvre or flank their enemies, and go help teammates or just spot from one side of a map to the other rapidly. The Cromwell gives players various styles to play and provides its part for a flawless victory!
Starting from May 13th at 19:00h Central European Summer Time the DLC “Lightweight Fighter Pack” will receive a 100% discount on Steam worth €17.99. It means that players can park a swift and perilous Tier VI Premium British medium tank in their Garage for free via this link. This special deal ends at 19:00h Central European Summer Time on May 23rd, so tankers should not miss their chance to grab a Premium tank for free.

In the “MISSIONS” section of the Garage, each player can find special Anniversary Missions, available until the end of the event on May 23rd. There are five missions in total, and they can be completed consecutively. After completing these missions, tankers will be rewarded with in-game resources and unique anniversary tokens. The token rewards can be used to purchase various anniversary rewards, such as Garage Slots, Consumables, Credits, a Universal Manual for crews, the ‘Flora’ 2D Style and more. Additionally, players should also check out the in-game store as they will find a surprise package there waiting for them.

About World of Tanks:

World of Tanks is the first team-based, massively multiplayer online action game dedicated to the golden age of tank-engineering. Immerse yourself in epic tank battles with gamers all over the world. Your arsenal includes over 600 armored vehicles from 11 nations, carefully detailed with historical accuracy.

Leave your comments below and let us know your thoughts!
Will you be taking part in the massive World of Tanks birthday event?