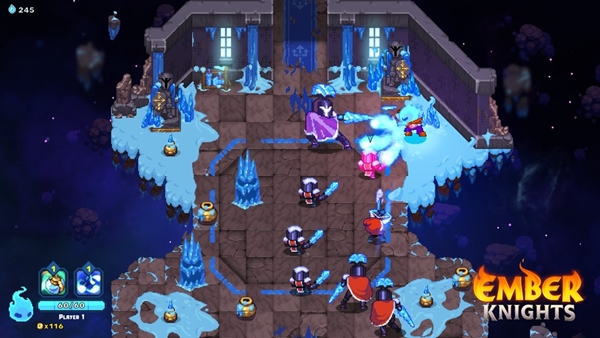 Asmodee Digital and Doom Turtle have released a new opening cinematic for Ember Knights, their next rogue-lite adventure. The game’s opening cinematic, players will have a first look at the engaging story, learning what is at stake and why powerful heroes are needed. The Early Access of Ember Knights will be available on April 20th, 2022, on PC Steam.

Players will play as the Ember Knights, powerful and legendary heroes who only appear when the world faces immense calamity. Esper, the Keeper of the Nexus, will require players to fight their way through the Prime Worlds to stop Praxis and save the Universe.

As players progress through the game, they will discover how Praxis, who was once Esper’s best friend, became a mad sorcerer after Esper was chosen by the Architect to become the new Keeper of the Nexus. Double-crossed and enraged, Praxis then traveled through the Prime Worlds until he found a dark spot in the Universe. There, he began to plot his revenge and to build his own version of the Nexus.

After an age of isolation, Praxis returned and his entire being has been consumed by anger and resentment. Conjuring his hordes, he launched an attack on the Nexus with the sole purpose of destroying those who have betrayed him and taking his revenge. In a final effort, Esper mustered up his remaining strength to summon the Ember Knights.

Featuring a retro pixel-art universe, Ember Knights will immerse players into a fiery 16-bit adventure. Legendary warriors can fight their way through the levels solo or with up to three friends, defeating hordes of enemies. The game offers hack’n’slash combat in which players will have to master timed attacks to make the best of the skills available to defeat all enemies. With dozens of different skills, weapons and relics to choose from, players can create hundreds of combat combinations to customize their playstyle.

Throughout the Early Access period, Doom Turtle will naturally support the game with the help of Asmodee Digital. This will include regular patches and content updates such as new weapons, skills, relics, enemies, bosses, worlds, gameplay features, and much more. The team will build the game along with the community thanks to their feedback and comments.

The Early Access of Ember Knights will be released on April 20th, 2022, on PC (Steam). Players will then be able to buy the game for 14.99€/$14.99/£11.39. The game will support keyboard and mouse controls, using a controller is recommended for the ultimate gaming experience. Ember Knights will be playable in solo and online & local co-op for up to four players.

Two Lara Croft Games Are Headed to the Switch