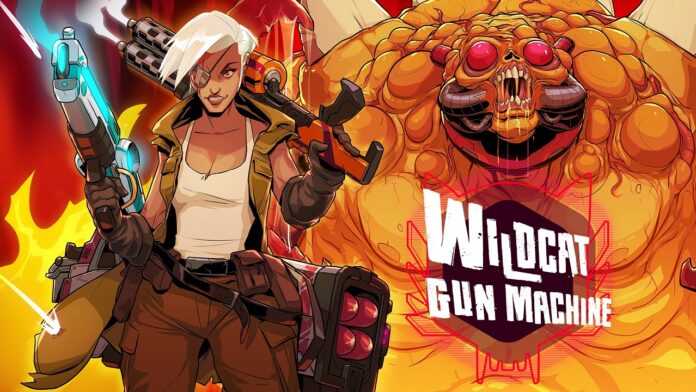 Daedalic Entertainment and Chunkybox Games are hyped to announce the release date for a master class in cartoon violence – Wildcat Gun Machine drops on PC (Steam, GOG, Epic Games Store), PlayStation 4, Xbox One and Nintendo Switch on May 4th, 2022. In this bullet hell dungeon crawler, our trigger-happy protagonist is not kittin` around – players face hordes of very non-cute flesh amalgamations with a whole arsenal of glorious gun-goodness.

The action-filled trailer presents us with a meowntain of bullets and a bad cattitude!

What to Know About Upcoming Bullet Hell Dungeon Crawler

Add Wildcat Gun Machine to your wishlist now and join the discord here. Assets can be found here.

Chunkybox is a small Australian indie studio based in Brisbane, founded by Dave Collinson and currently working on launching their debut title Wildcat Gun Machine.

Daedalic Entertainment publishes and develops high-quality games for all platforms. The company has a diverse line-up of high-quality titles, including classic adventures, RPGs, and strategy and multiplayer games. With over 50 employees, Daedalic is currently developing a new line-up of innovative games across consoles, PC and mobile platforms.

Based in Hamburg, Germany, Daedalic is one of Europe’s most acclaimed publishers and developers. With a total of 32 awards in the German Developers Award (including multiple accolades for ‘Studio of the Year’) and 12 German Computer Game Awards for genre-defining games such as Deponia, Edna & Harvey, Silence, Shadow Tactics: Blades of the Shogun, Ken Follett’s The Pillars of the Earth, The Long Journey Home, and State of Mind, Daedalic is a record holder for the two most prestigious game awards in Germany. Recent publishing hits include Barotrauma, Unrailed!, Iratus: Lord of the Dead, Partisans 1941 and more.

What Nintendo Can Do With 2D Mario