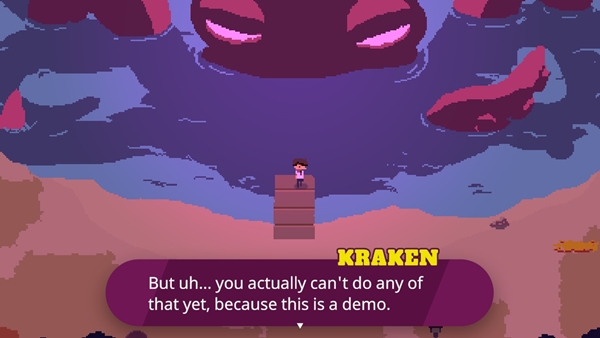 Kraken Academy!! is a hit PC game that was released in September of 2021. The game is now making its way to Xbox and Nintendo Switch, with both expected to release in March.  Ahead of its official release a Kraken Academy!! demo has made its way to the Switch store and I had the pleasure of experiencing this uhm… interesting glimpse at the game.

After the overly peppy and well-animated introduction, I was plunged into a setting that just felt uneasy.  The colors are dull, the characters look plain in the open world, and the school is run down and disgusting in every way. The dialogue continues to set up this tone with Broccoli Girl being terrified of arriving late to class and a staff member charging me for entry to the school in a very extortionary manner.

The Kraken Academy!! demo perfectly sets the tone that acts as a perfect backdrop for the game. This dingy school filled with unsavory characters is the setting for a game filled with humor and charm. That complete shift is really well done as the game balances an unsettling surrounding and tense conversations with some of the best laughs I’ve ever gotten from a video game. The humor absolutely shines through, largely BECAUSE it’s taking place in such a serious environment.

As I always say, the measure of a good demo is to make me want to part money with the full version. In this case, I don’t think it did. Yes, this game was funny and it’s clearly loaded with interesting people but the demo didn’t show me enough of that to truly hook me. Take away the jokes and all I really did was press the X button a bit in minigames and smash up lockers for bottles. It only begins to settle into the story at the very end without providing enough of a hook or loose thread for me to have the itch to play the full version.