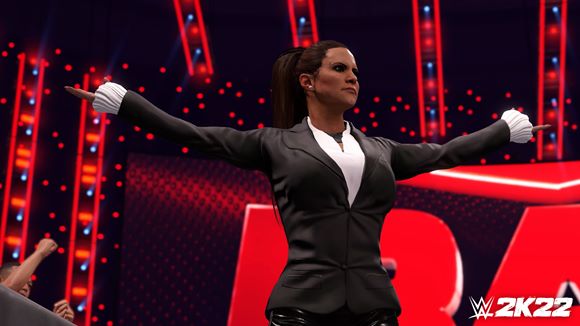 2K today unveiled the WWE® 2K22 MyGM trailer and Ringside Report #2, the second entry in an ongoing video series offering deep dives into the game’s features, mechanics, and more. The MyGM trailer features voiceover from Stephanie McMahon, WWE’s Chief Brand Officer and a former Monday Night Raw and SmackDown General Manager herself, as she offers an overview of the new mode and advice to intrepid players. The Ringside Report #2 video gives fans a deeper look at MyGM, one of the most highly anticipated new game modes in WWE 2K22, breaking down systems, important player choices, and management mechanics.

Check out the trailer:

In the Ringside Report, Creative Director Lynell Jinks, Art Producer Christina Diem Pham, Design Director Alan Flores, Producer Bryan Fritz, and Senior Designer Chris Misenas walk viewers through MyGM, from the initial choice of one of five General Managers – including Stephanie McMahon herself – and four distinct brands, to the eventual goal of hosting WrestleMania and crushing the competition. Along the way, the Visual Concepts developers trade verbal jabs while providing tips and tricks, showcasing the many unique ways player expression can manifest through management styles.

A Glimpse Of What’s To Come

Throughout the MyGM deep dive, the Visual Concepts team explores:

For more details on the latest innovations coming to WWE 2K22, check out the MyGM Trailer and full Ringside Report #2 now. WWE 2K22 will be available on March 11, 2022*.