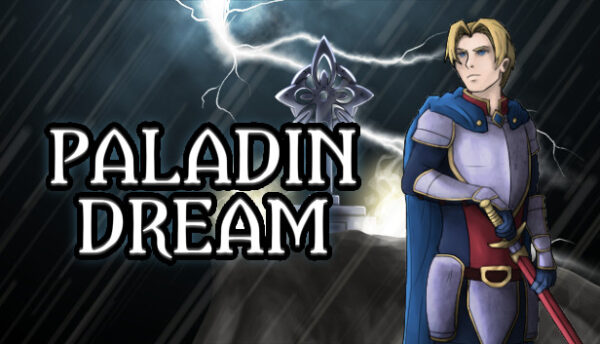 The current era of gaming sits at a wonderful crossroads between pushing new boundaries and fueling nostalgia at the same time. So many games release with obvious odes and homages to previous work that it’s just simply commonplace to say Death’s Door is obviously inspired by the Legend of Zelda. The same could be said for Paladin Dream which takes its Super Nintendo RPG roots and builds an entire game around them. Taking all the customary aspects you’d expect from an older Final Fantasy or Dragon Quest just in a shorter format. Making for an enjoyable experience that removes most of the grind and replaces it with a simple linear adventure. This is the Paladin Dream Review. 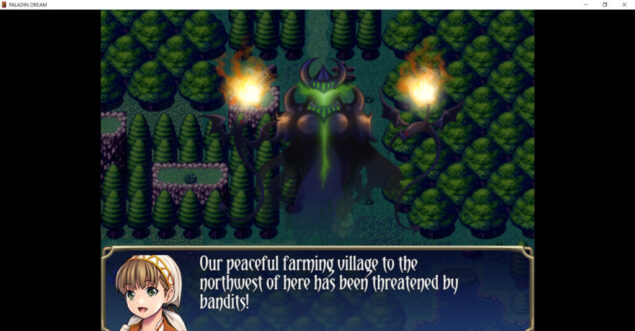 Josiah continuously has the same dream every night of wandering this cave, finding a Gray Knight, and then losing quickly in battle. This vision’s commonality is so well known that even the townsfolk ask Josiah about it as he walks the halls of the abbey where he was raised. The once orphan now Paladin soon decides to venture beyond the abbey’s walls in search of enlightenment. However, it won’t take long for Josiah to find out that the once banished great evil has returned. Leading him down a path similar to that of his dignified predecessor, where he’s suddenly thrust into becoming the world’s savior.

What I appreciated most about Paladin Dream is its brevity. It doesn’t have long drawn-out cutscenes or a nonsensical story. It strives to tell its tale within its roughly six-hour runtime and actually appreciates you for reaching the end as well. It uses religious overtones well in making its point that Josiah achieved similar success to his almost godly forefather without excessive fanfare. Instead, focusing on the love from a fair few in helping guide his journey. Although there are small sections of the story where you can deviate from the set path, they merely serve as sources of temptation and not a true separate story beat.

Battle it Out on Screen

Another wonderful positive about Paladin Dream is no random encounters. All of the nicely drawn 2D sprites appear on the screen and their walking paths are equally as predictable. Turn-Based battles of the era are the way of life here, as Josiah clashes with gnarly looking imps and Minotaurs in one area to then faces off against more incredible beast type adversaries such as bastions and ogres later in the game. There’s actually a fair amount of villain variety throughout the expedition as each major biome has its own set of creatures.

Navigating through the world map is rather straightforward and as long as you are somewhat experienced with the basics of RPGs and don’t mind figuring things out a bit, finding your way to the next plot point is hardly a challenge. The game has a map that you can find at various points, but a la the aforementioned Death’s Door, there is no mini-map or map viewing option at all. I’m sure many would find the lack of a consistently available map frustrating, but honestly, you do not need it. There are only a set number of locations and by doing the usual exploration and talking to NPC’s you’ll easily figure out where to go next quickly. Take this from someone that doesn’t hesitate to go find a walkthrough when I get stuck in a game, I did not need it for Paladin Dream.

I will caution that the developer reminds you constantly that you should manually save and also probably use multiple saves at that, and although it does have an autosave as well, sometimes the autosave doesn’t put you in the most advantageous spot. So if you are not from the old era like me that saves a lot, you may want to do so for this game.

Taking a Turn to the Dark Side

However, you should not take my description of short and linear to also mean the game is easy. There is effort involved in completing Josiah’s quest. Other RPG staples of the era such as puzzles, item shops, and a small bit of grinding are included as well.

Armor and statistics are super important in Paladin Dream. In fact, some of them are so vital that you can’t progress without purchasing or finding them. For example, there’s a section where you reach one of those temptations I wrote about earlier and if you don’t purchase a certain armament or find it as a drop, after a battle, you won’t be able to get past some guards who stand in front of the entrance of the next major area.

This also applies in battle as well. By in large, enemies are more powerful than Josiah and it won’t take long until you start running into some that will absolutely wallop him if you don’t come prepared. Although grinding for levels helps lower the damage enemy attacks cause, it won’t prove fruitful on its own because you’ll eventually lose the fight, even with multiple healing items available. After a while, I figured out that agility and luck are more important, as the way to get through the big brutes is by making them miss attacks at a consistent clip. Combine that with better weapons for Josiah and it creates a powerful concoction that lays waste to anyone that gets in his way.

The other major element I appreciated was that Paladin Dream rewards exploration. This isn’t the case for every biome, but many of them have hidden side quests, NPC’s, or items that make walking beyond the expected path worth it. There’s even a neat maze that goes into a fiery place with its own set of enemies you won’t see anywhere else in the game. There are probably quite a few secret things I didn’t find during my playthrough that still lurk out there, as I only obtained 9 of 24 achievements after rolling the credits.

Although the puzzles aren’t necessarily difficult they do come in the form of these interesting lore riddles that you find in books. Speaking of that, there is lore regarding a number of things littered around Paladin Dream that fills the world with much more life than just simply venturing from point A to point B does. It made me care about what I was doing and pushed me to keep searching for more information as well.

Paladin Dream is built with RPG Maker and the sprites are smooth and look great. The enemies in particular are fantastically well-made for battles, although perhaps Josiah doesn’t stand out as well as they do. Again the variety of them, once you go through each biome, is worth noting. Yes, in each biome there are only probably four or five distinct enemy types, but as a whole, a lot of care was put into each biome and the enemies chosen to represent this particular biome.

There’s nothing groundbreaking about the biomes or areas you’ll find in Paladin Dream, but they don’t have to be. In representing the genre they are suitable for what’s required. What makes them stand out are the lighting and weather effects that are added outside and inside battle. Going inside buildings may show light coming in from a window. Whereas a desert area or the snowy mountains have weather that reflects its setting. Perhaps my favorite setting of the entire game was the spooky forest area that used its lack of lighting well in providing a terrific atmosphere.

I also enjoyed the music in Paladin Dream, in fact, you can buy the soundtrack on Steam as well. The battle theme does the job of keeping you motivated during battles. Each biome has its own music and the towns have their theme too.

Final Rating: 8 out of 10: Paladin Dream relishes in giving you everything you’d expect from old school SNES RPG without the arduous over-grinding and super lengthy story. It makes its point, provides some hours of enjoyment, and leaves some hidden things for you to find if you wish to go back to it. It’d actually be nice to see more games take this approach quite frankly. Considering the game is now only $4.99 (USD) that’s a steal for how much I enjoyed the game. If you are an RPG fan or just looking for something to dive into for a short amount of time this is well worth checking out.

Midnight Protocol: This Hacking RPG Will Make You Feel Cool