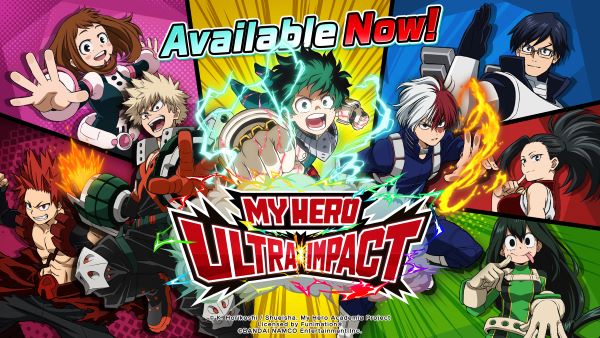 BANDAI NAMCO Entertainment Inc. is happy to announce that MY HERO ULTRA IMPACT, a new smartphone game for the App Store/Google Play Store, is now available! Based on the smash-hit anime series My Hero Academia, MY HERO ULTRA IMPACT features casual RPG combat featuring iconic characters from the series.

Check out the launch trailer below:

Having previously been released in Japan, players will have access to a plethora of content from Day One. With the English version of the game being a direct translation of the Japanese title it’ll be fully up to date with new characters, features, and events. This will include a new update that features a Player versus Player mode in the game. MY HERO ULTRA IMPACT has already surpassed 3 million downloads in Japan since its release in May 2021.

*The game is available in 57 countries, including North America, Europe, and Asia.

As a way of saying thanks for all the users that participated in the preregistration campaign, all players will receive 750 Hero Gems (enough for 15 Recruits) after installing the game! Additionally, between 10th February 15:00 JST and 16th March 14:59 JST there will be an increase in drop rates on Global Release Celebration Recruit for highest rarity characters, UR [Crush Despair] All Might and UR [Ruler of Evil] All For One!

Additionally, there will be a Running Start Login Bonus and Global Release Celebration Login Bonus to celebrate the launch of the game! At these events you’ll be able to gain useful items everyday such as up to Global Release Recruit Tickets, 550 Hero Gems and Character Lv Up Bars to train your favorite characters!*

*Campaign period and details are subject to change without notice.

*Please check the in-app notice for more details of the campaign.

Follow our official social media for more details about MY HERO ULTRA IMPACT!

Excited to see how this plays!