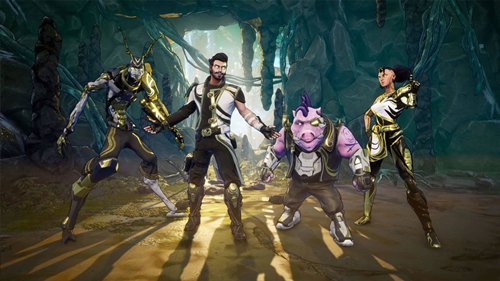 “The Core One” Releases for Space Punks

“The Core One” will see the start of a core game loop overhaul, providing a greatly enhanced player experience built on the community’s ongoing Early Access feedback. Following party system and social UI improvements in “The Friendly One” update, and substantial technical and systems tinkering in earlier patches, “The Core One” tackles the player experience head on.

Brand new story missions on the planet Stopan – Safecracking and Rescue Robot! – have been added for maximised mayhem, while the Restarting Mining Facility challenge has been overhauled. Planets and game modes can also now be unlocked with Power Level and Hero Level, while those seeking a stiffer challenge can take advantage of the redesigned difficulty options. Oh, and did we mention that Timed Events are now permanently set to Hardcore difficulty? You’ll get extra loot, but be prepared to take some serious fire.

In addition, character skills descriptions have been updated, all crafting elements and talent items can now be scrapped and the workbench has been improved to allow for smoother upgrading. The Devil’s Gambit maintenance crew (the development team) will now also be dropping a Message of the Day to all players with vital news, as well as personalised info via in-game mail.

Head of Flying Wild Hog’s Krakow Studio and Space Punks Game Director, Michał Kuk said: “We’re always excited about responding to player feedback and making Space Punks an ever-more awesome experience, and this latest update is the most important part of our Early Access journey so far. Paving the way for even better changes to come, these improvements are exciting additions and we’re really seeing how incremental community-driven changes combine to make a huge and positive impact on Space Punks.”

The core game loop overhaul will continue in the next update, which is just around the next mineral-rich comet and to the left of that gas giant with the robot-infested planetary system.

Full patch notes for the “The Core One” update are available here: https://www.playspacepunks.com/updates

Last of Us 2 Charts Domination on Opening Weekend