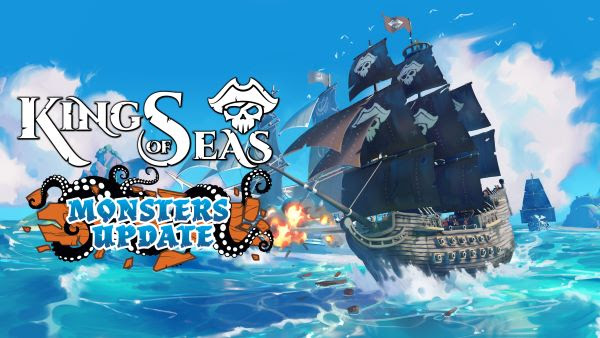 November 18th has seen a King of Seas update for the pirate action RPG from Team 17 and 3DClouds which brings new monsters, new quests and also mouse support for PC gamers.

King of Seas Update Adds Monsters of the Deep

Monsters of the Deep are Awake…..And Hungry

King of Seas released in May 2021 on Nintendo Switch, Xbox One, PlayStation 4 and PC and now the game has a new update which means you will face brand new quests as well as new monsters such as a Basilisk, Abyssal Fish, Cursed Golem and Kraken who you will need to fight, beat and loot. It’s a pirate’s life OOh arr!

What’s Included in the Update?

In a press release the following was stated;

The update includes additional quests and new creature encounters for players as they embark on an epic journey across procedurally generated open seas, work to clear their name, and engage in strategic navel combat to become the true king of the high seas.

Are you ready for a new battle on the high seas? Will you be donning your bandana, sword and looking to grab as much loot as you can or would you prefer a more sedate Canal Boat ride? One thing is sure and that is that things are going to get tempestuous out on the water so be aware and keep your wits about you.

New Splinter Cell Game May be in Development

Pac-Man Museum+ Announced for PlayStation 4, Xbox One, Nintendo Switch, and...