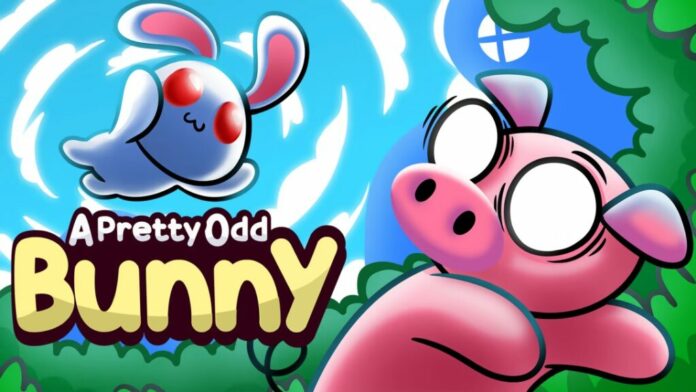 A Pretty Odd Bunny is an independent game that has released across multiple platforms, including Android! It’s a pretty eye-catching game that hooked me with the line “…stealth platformer about a rabbit who likes eating pigs”. Who wouldn’t be intrigued by that kind of premise for a video game? Unfortunately, as I’ll detail in this A Pretty Odd Bunny Review this eye-catching game was more of a letdown than a home run.

Given the main selling point of this game is the idea of a bunny who eats pigs it’s safe to say I went in expecting a unique experience.  I’m glad to say that the developers ran with this idea and the game benefits from it. The snap of a pig’s head when it has been eaten, the reactions of the bunny when it’s caught, the reactions of characters that had to witness me devouring a pig, it’s all very enjoyable. And the kicker? The bunny I’m playing as is ALLERGIC TO CARROTS!! I cannot tell you how much joy I got out of that plot point.

The colorful tones of the game fit with its overall lighthearted atmosphere, everything is bright and colorful but ultimately kept simple. Even the backgrounds are mostly vague buildings in the distance but they’re always nice to look at.

The stealth and platforming are also kept simple but the level design is clever enough to crank up the difficulty when needed. The developers kept the mechanics simple but they designed levels around those mechanics to make the absolute most of the controls. The increased difficulty is where my issues come in however

This game crashed on me, a lot. And for the most part, I didn’t mind that too much but as the levels started to get more difficult it ultimately became too frustrating to make it 85% of the way through a level only for the game to crash. I don’t know if I’m just unlucky with these errors or if others can overlook them but this absolutely killed my interest in A Pretty Odd Bunny.

I do like this game, I love the idea behind it, I love the levels crafted to maximize the difficulty of a basic set of mechanics, I love the visuals.  But ultimately, I can’t overlook the number of times this game failed on me.  Without the constant crashing, I would probably have this at a 6+ rating but my actual rating has to be;

Last Word on Gaming’s Writers’ Game of The Year……..The Winner Is….