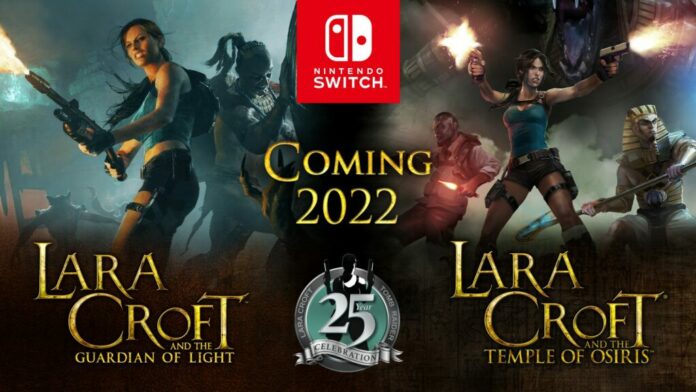 Lara Croft is Headed to the Nintendo Switch

Great #TombRaider25 news for @Nintendo fans! We are so excited to announce a collaboration between @CrystalDynamics and @feralgames to bring Lara Croft and the Guardian of Light and Lara Croft and the Temple of Osiris to Nintendo Switch starting in 2022! pic.twitter.com/S1PBaxhJqt

No confirmed release date has been announced, but Switch gamers can expect the games to release next year. Crystal Dynamics and Feral Games will work together to bring the games to the Switch. Guardian of Light was originally released in 2010 on Xbox and PlayStation consoles as well as Steam.

The game was a bit different from traditional Tomb Raider releases. It was played from a top-down perspective and put an emphasis on cooperative play. The game was well-received critically and led to the sequel, Temple of Osiris.

Temple of Osiris was released at the end of 2014. It followed in the same style as Guardian of Light. Players were treated with Croft’s signature dual pistols that carried infinite ammo. The game carried a more arcade-style than the traditional Tomb Raider releases. Like Guardian of Light, an emphasis was put on cooperative gaming.

Stay tuned to Last Word on Gaming for more release date updates on this port as they become available.