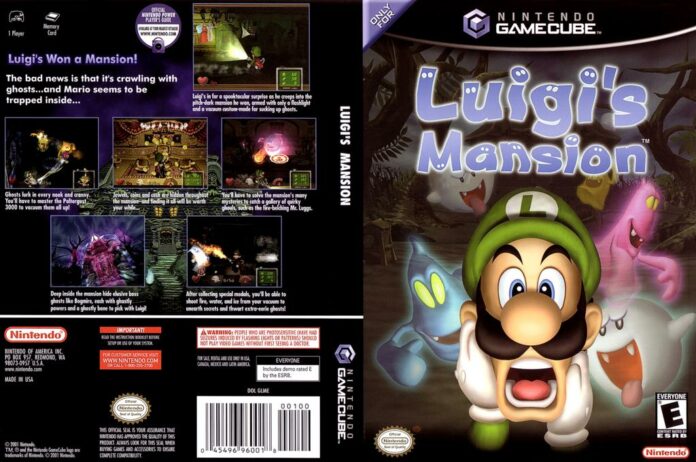 Gaming has a rich history that spans multiple decades. To this end, The Last Word on Gaming Backlog is a series that looks back on titles across all generations. From the golden 8-bit era to the landscape-changing 64-bit scene and beyond, The LWOG Backlog’s aim is history. If bustin’ makes you feel good, it’s time to either revisit or experience, for the very first time, Luigi’s Mansion for the Nintendo GameCube.

Luigi’s Mansion for GameCube – An Overview

A Unique Step Forward in the Mario Series

It’s fair to call the Nintendo GameCube one of the most unique platforms in the gaming’s home console history. Boasting a cube-like design, hence the name, and requiring the utilization of mini-DVD discs, it certainly stood out compared to its contemporaries in the PlayStation 2 and original Xbox. Though it may not have had a wide array of features – this was largely due to the aforementioned proprietary mini-DVDs – many Nintendo fans regard it as one of the most beloved consoles in history. One of the reasons for this is its extensive software, which can be seen as far back as day 1.

The Nintendo GameCube was released in Japan and North America in 2001, with Europe and Australia receiving it the following year. One of the launch titles was the original Luigi’s Mansion, developed and published by Nintendo. Upon its release, reception was somewhat mixed, as many gamers expected something more akin to a traditional Super Mario adventure. Simply put, Luigi’s Mansion for GameCube was not that. Despite this, it would go on to become one of the best-selling titles on the platform. Let’s take a look back at this unique adventure.

As the title suggests, Luigi’s Mansion for GameCube stars the leaner, younger brother of the iconic gaming icon. One day, Luigi receives a message, saying that he won a huge mansion. After calling Mario to meet him at the location, Luigi makes his way over. Upon stepping foot inside the mansion, he immediately feels unsettled, as if his new abode is still inhabited. Luigi soon encounters a ghost, but before any damage can be done, he’s saved by an old man with a vacuum cleaner-like device on his back. Introducing himself as Professor E. Gadd, he provides Luigi with the tools he needs to not only get rid of the nefarious ghosts but find where Mario has gone.

For the first time, since Mario is Missing on the NES and SNES, Luigi has the starring role. It’s also in Luigi’s Mansion for GameCube where many of his long-standing character traits originated, including his cowardly demeanor. Even when a room has been completely rid of ghosts, he always seems on edge. The mansion itself is almost like a story in its own right; each room is distinct, making said mansion feel like an interconnected world. The primary objective – to rescue Mario – is effective at pushing the player forward, despite the unique gameplay compared to traditional Mario titles.

Unlike the fast-paced nature of traditional Super Mario adventures, Luigi’s Mansion is methodically paced, deliberate, and atmospheric. Essentially, as Luigi, you are tasked with hunting down the mansion’s various ghosts, containing them courtesy of the Poltergust 3000, not unlike the Proton Pack in Ghostbusters. The way that vacuuming works is very much like a fishing game; wherever the ghost tries to move, you must tilt the Control and C Sticks in the opposite direction. Slowly, but surely, the ghost’s power will whittle down before they’re ultimately captured. Some ghosts are more difficult to seize than others, which will become evident the further Luigi travels into the mansion.

Along the way, in Luigi’s Mansion for GameCube, the cowardly yet steadfast protagonist will encounter riches of different types. At first glance, the various coins, bills, gold bars, and jewels may seem superfluous. However, by collecting these, the ending of the game will change in a certain way. It’s important to note that this isn’t mandatory to completing Luigi’s Mansion, as collecting as much money as possible is more of a side quest than anything else.

From pursuing ghosts to searches for riches, navigation may seem overwhelming. This is where the Game Boy Horror, courtesy of E. Gadd, comes into play. Conspicuously resembling a Game Boy Color, this tool houses various functions. These include, but aren’t limited to, finding where Boos are throughout the mansion and searching rooms from a first-person perspective. Luigi’s Mansion isn’t a complex game, but given that some areas are trickier than others, the Game Boy Horror keeps the gameplay experience user-friendly.

While not a horror game at its core, Luigi’s Mansion features a spooky yet still lighthearted aesthetic all its own. From the designs of the various ghosts to the ever-changing décor of the mansion itself, Luigi’s Mansion showed what the Nintendo GameCube could do from a visual standpoint. Luigi himself is very expressive. His uneasiness when entering haunted rooms and his whistling of the game’s main theme when in quiet areas go a long way in building upon his personality and making him that much more fun to control in-game.

Composed by Kazumi Totaka and Shinobu Tanaka, Luigi’s Mansion for GameCube has a whimsical soundtrack with creepy overtones. The game’s main theme would become synonymous with not just the series but, as time went on, Luigi himself. Totaka should be a familiar name to long-time Nintendo fans, as he composed music for Super Mario Land 2: 6 Golden Coins, Yoshi’s Story, and the Animal Crossing series, among others. Meanwhile, Tanaka has been credited for her work on titles including Super Mario Sunshine and Wii Play.

On the surface, Luigi’s Mansion for GameCube isn’t a long adventure. In fact, one can see their way to the end credits within a dedicated afternoon or within 4 and a half hours. This isn’t to say that more fun can’t be had. As stated earlier, the ending can change, ever so slightly, due to how much money the player collects. Furthermore, there are optional ghosts scattered throughout the mansion, meaning that there are other challenges to tackle outside of those required to complete the game. Luigi’s Mansion has more to offer than what it appears to.

Luigi’s Mansion for GameCube was a launch title that, despite initial mixed reactions, became a classic in its own right. It would go on to become the fifth best-selling game on the console, at 3.33 million copies sold, exceeding the sales seen by the original Metroid Prime and Animal Crossing games, among others. The game’s legacy can still be felt today, too. Not only did characters such as E. Gadd become franchise staples, but Luigi’s Mansion would see representation in the Super Smash Bros. series, with Luigi himself adopting moves and techniques from his spooky romps.

Over a decade later, on the Nintendo 3DS, a sequel arrived in the form of Luigi’s Mansion: Dark Moon. This particular title focused less on free-roaming gameplay and more on a mission-based structure, though it retained previous gameplay elements and added others. However, the most recent installment, Luigi’s Mansion 3 for the Nintendo Switch, was more in line with the original title and became one of the most popular games of 2019. For those that wish to experience the first game, however, the 3DS remake of Luigi’s Mansion may be for you. Released in 2018, this particular remake incorporated new gameplay features, as well as amiibo and gyro functionality. Given that the GameCube original hasn’t been re-released, the 3DS reimagining may be your best bet.

Why not let us know your thoughts on this classic game and other topics in the Last Word on Gaming Discord server.