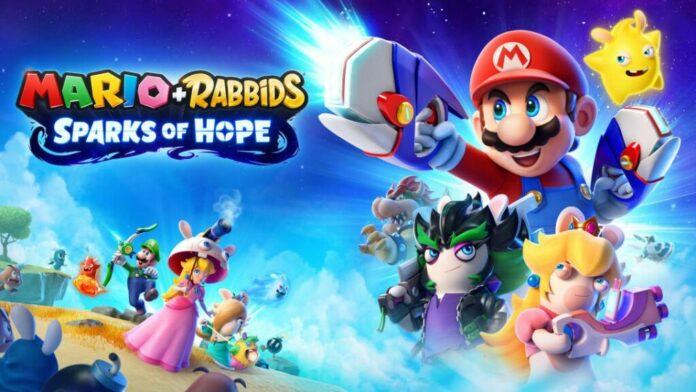 Today, as part of E3, Ubisoft held their Ubisoft Forward event. During the event in question, multiple projects were announced. One of the most notable was the sequel to Mario + Rabbids Kingdom Battle, a turn-based tactical strategy title featuring Super Mario and Raving Rabbids characters. Today, it was confirmed that a sequel will be released – Mario + Rabbids Sparks of Hope.

At the Ubisoft Forward event, the company showcased a cinematic trailer for Mario + Rabbids Sparks of Hope. The game focuses on the combined forces of the aforementioned franchises, including Mario, Luigi, Princess Peach, Rabbid Mario, Rabbid Luigi, and Rabbid Peach. They must work together, exploring various planets in order to save their Spark companions and defeat a malevolent force. Will their efforts be enough to restore peace once again?

As was the case with its predecessor, Sparks of Hope is a turn-based tactical strategy game. In this series, turns are taken as players carry out different actions such as movement and attacks. Characters are encouraged to work together to win battles, using combined maneuvers and their own passive abilities alike. The game also incorporates RPG elements, allowing characters to earn and upgrade various abilities.

One of the most notable aspects of Sparks of Hope, based on the trailer, is the removal of the grid that was prevalent in the previous title. Despite the fact that the game will remain turn-based, the absence of said grid seems to lend the game to more of a free-moving approach. It’s also worth noting the inclusion of new characters, such as the comically ingenious Rabbid Luma and Rabbid Rosalina. Mario + Rabbids Sparks of Hope is set for a 2022 release on the Nintendo Switch.

Of all the titles unveiled during the Ubisoft Forward event, Mario + Rabbids Sparks of Hope may have been the most popular. This is especially true given the initial lukewarm reaction to its prequel. When Kingdom Battle was first announced, many fans were uncertain as to how to react. Many responded with hopeful optimism. Others, however, believed the crossover between the Super Mario and Raving Rabbids franchises to be a misstep. However, following its release, it was received favorably by gamers and critics alike. Case and point, the same year it was released, Kingdom Battle was awarded Best Strategy Game and Best Original Game at the Game Critics Awards.

Furthermore, it can be argued that this is the first Nintendo announcement for E3. Despite the fact that this series is developed and published by Ubisoft, Nintendo’s inclusion in its creation can’t be denied. In fact, many viewers tuned into E3 are going to be most interested in Nintendo’s offerings. If the announcement of Mario + Rabbids Sparks of Hope is any indication, Nintendo will have many interesting news stories to share. Stay tuned to Last Word on Gaming for continued E3 coverage.

SpongeBob Cannot Topple Last of Us 2 Atop of Gaming Charts