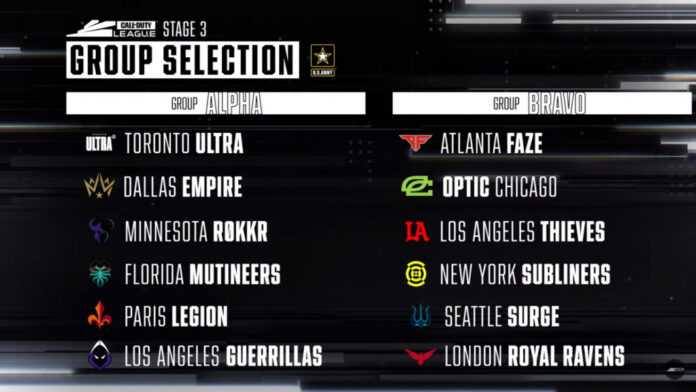 Stage 3 of the 2021 CDL season has wrapped up following the Dallas Home Series this past weekend. Following the matches, the Stage 3 Major’s bracket is now set with the tournament set to kick off Thursday, May 13. There are plenty of intriguing storylines heading into the major, which is shaping up to be the best of the season.

The official bracket for the #CDL2021 Major III presented by @USAA ⬇ pic.twitter.com/De1ufaz0gx

Looking at the bracket, there are a few surprises, but nothing crazy. OpTic Chicago starting in the losers bracket as Group B’s four seed is the biggest storyline but it shouldn’t be all that surprising. After starting the season as a consensus top-three team, Chicago has fallen apart. In the first two stages of the season, they were one of the best respawn teams in the league, but struggled in Search and Destroy. Roles were reversed in Stage 3, with OpTic being a top SnD team but struggling to win the respawn modes. Against the top three teams in Group B, OpTic was a combined 1-7 in the respawn modes in Stage 3. With respawns composing 60% of a series, that number, obviously, won’t cut it.

The other major takeaway from the bracket is the emergence of the Florida Mutineers. At the start of the season, Florida was widely considered to be a top five team in the CDL. They have failed to meet expectations so far, currently sitting in eighth place for the season. Being on the fringe of the top eight is a concern, as only the top eight teams qualify for the championship tournaments at the season’s end. Florida’s dominant win over the Dallas Empire was a pleasant surprise in Stage 3, though they will need to be more consistent if they want a real chance at winning the major.

When looking at the bracket, it feels apparent that the top eight teams are starting to distinguish themselves. The Los Angeles Guerrillas, London Royal Ravens, Seattle Surge, and Paris Legion are the four teams starting in the first round of the elimination bracket. Right now, these clearly feel like the bottom four teams in the league. With all four on the outside looking in for Champs, a run through the losers bracket would generate valuable CDL points for any of these teams.

Currently, Los Angeles is just 10 points behind Florida for the eight seed, while Paris trails by 30, and London and Seattle are behind by 40. Winning a series produces 10 points for a team. Despite Los Angeles being the closest to the eighth seed, London seems like the bottom four team with the best chance of making a run to the top eight. They are starting to play much better, but it might be too little, too late. With the way Florida is performing, it will likely be tough for any of these bottom teams to catch up.

Toss-Up at the Top

For the first time this year, it’s nearly impossible to have a feel for who the top team is. Through Stage 1 and the Group Play portion of Stage 2, the Atlanta FaZe were head and shoulders the best team. After winning the Stage 2 Major and starting Stage 3 hot, the Toronto Ultra seemed to take the crown. Now, these two teams are joined by the New York Subliners at the top of the league.

There is legitimate reason to believe that any of these teams can win the tournament. New York has been the best Hardpoint team in the CDL in Stage 3. Since HyDra has been added to their starting lineup, they have hit a different level in respawns. Toronto is the best SnD team in the league, which is the most important game mode in a Grand Finals series at a tournament. The Ultra’s teamwork is also the best in the league, which goes a long way. FaZe is still the number one team for the season, with just three series losses all year. They have the most powerful slaying in the league, and are elite at all modes. If they can continue their level of play in SnD, they can undoubtedly give Toronto a run for their money.