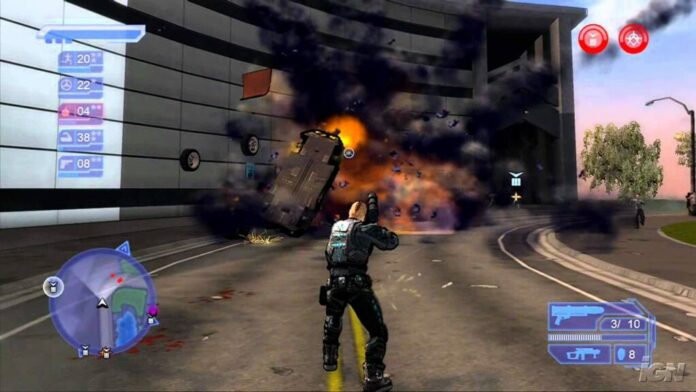 It’s hard to believe that the original Crackdown game was released back in 2007. Nearly 15 years later, it has spawned two sequels including a re-release on the Xbox X. Although this game never quite reached its potential, nor did it change the landscape of gaming, it did at least make for an enjoyable experience. The result is that back in 2007, and even in 2021 – it generates mixed reviews amongst gamers.

You heard correctly, the original Crackdown was dubbed as a genuine threat to the Grand Theft Auto series — one of the best games of all time. Although this never materialized and GTA went on to be stronger than ever, at the time this idea was plausible. So, why was Crackdown held in high regard before its release? Well, it generated a lot of hype based on the involvement of David Jones who generated Grand Theft Auto. Although it’s easy to laugh these comparisons off today, it’s also conceivable to see why some thought that Crackdown would bring a new dawn.

Offering something different compared to most sandbox games

Over the years, there have been various clones of the GTA series. However, Crackdown differed in some areas. It was still an open-world environment and still a third-person shooter. However, it was also set in the future. Here, the player took the role of a super agent, that was genetically engineered and had to take care of the city’s criminality. The result can make for quite a fun experience. Basically, every time you kill a villain, you add points to level up. These points can improve your athleticism, shooting, explosives, driving and strength. It’s a nice touch which adds an RPG-element to the game.

Perhaps the most fun part of the game is earning God-like athleticism skills and literally being able to jump from high-rise buildings like a superhero. This should get tiring quickly, but in terms of lazy gaming, it offers a perfect form of escapism. This ties in with the futuristic elements of the game and it doesn’t take itself too seriously.

So, was Crackdown any good?

As mentioned, this game didn’t exactly re-define the genre, nor is it really considered a classic. However, think about this for a minute: upon its release it went gold, selling over one million copies. Most mainstream critics also scored it an 8/10, which is probably a fair score. With this said, it was certainly a solid game – but obviously it never came close to rivaling GTA in terms of what was on offer.

Where Crackdown got it right

Looking at the positives, Crackdown thrives on being able to immerse you in the gameplay. As mentioned earlier, it’s genuinely enjoyable to play as a super-soldier, who feels indestructible at times. Not only this but in terms of graphics, it also holds up well by today’s standards too. At the time, Crackdown opted for cartoon-like graphics which means no real polygon shapes and the result is still easy on the eye. Visually, the vast, futuristic city is quite a sight as well.

In terms of actual game play, there’s just about enough going on to keep you entertained. Here, you must take out criminal bosses of three rival gangs and clean up the city. It can get quite repetitive but as said, there’s enough for most people. Along with side quests such as races and leveling up, it is worthy of its 8/10 status.

Where Crackdown got it wrong

As also mentioned, Crackdown wasn’t a masterpiece either and could certainly be improved. Firstly, at times it can feel repetitive. The bosses may differ in terms of location, but that’s about it. So, you go around killing one boss and their soldiers and then it’s on to the next. This can get a bit boring, especially if you plan to play it for a few hours in a row. As well as this, the bosses can also be accused of being too easy. This is probably the main critique of the game in general. Even in the hardest setting, you can easily take out bosses and as long as you shoot from a distance, you will be safe.

This brings us to the next issue; shooting. The shooting mechanics can feel clunky at times. Here, you can hold down the RT button to auto-aim and then fire. Too often, it locks on to a vehicle or a dead enemy, instead of aiming at the intended target. In general, the controls are good, but when it comes to shooting they could be improved upon. However, as the game is so incredibly easy at times…this can be a good thing, or a bad thing depending on your opinion. Further, when it comes to enemies, their AI is almost non-existent. Very rarely will they run or hide, instead they will often stand there like a sitting duck.

Lastly, there isn’t much depth in general. For those wanting lots of lore and backstory like GTA, this can’t be found in Crackdown. The game can be completed in around 5 hours if you don’t want to mess about, albeit the strength of the game is taking your time and having fun.

If there was a category of ‘lazy’ games, then this would be near the top in terms of fun. As you may have guessed by now, it’s too easy at times and lacks obstacles. Nonetheless, there’s an undeniable charm about this game that most people enjoy. With this in mind, if you’re after something to stimulate you, then Crackdown isn’t it. However, if you have a couple of hours to pass and want to feel invincible then Crackdown is for you. The beauty of this is that it’s actually free on the Xbox 360 marketplace. Similarly, if you do want to pick up a physical copy, it can be purchased for around $1-2 dollars at most pre-owned stores.

So, if you want something to pass the time and aren’t too judgemental, Crackdown could be the ideal game for you to spend hours mindlessly throwing cars and jumping tens of feet into the air.

Toree 2 Review (Nintendo Switch) This Indie Delights The Senses For...