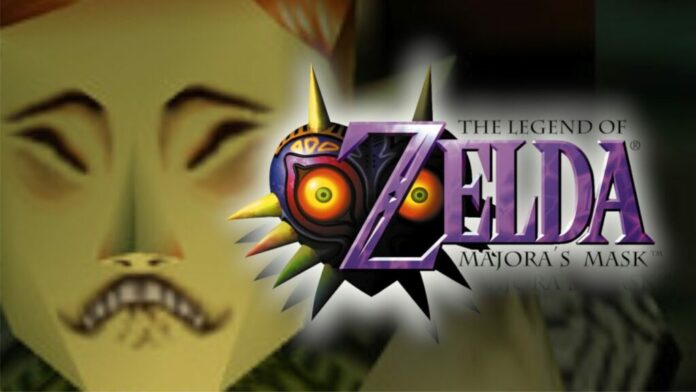 Gaming has a rich history that spans multiple decades. To this end, The Last Word on Gaming Backlog is a series that looks back on titles across all generations. From the golden 8-bit era to the landscape-changing 64-bit scene and beyond, The LWOG Backlog’s aim is history. This week, we look at a Nintendo 64 action-adventure game with adult themes and existential overtones – The Legend Of Zelda: Majora’s Mask for Nintendo 64.

The Legend of Zelda: Majora’s Mask – An Overview

The Moon is Falling

Nintendo has remained constant and relevant in their own lane when it comes to creating consoles. The Nintendo 64 was released in 1996, and immediately helped innovate three-dimensional gaming. Focused on re-inventing it’s staple franchises, Nintendo developed the Zelda franchise with titles like Ocarina of Time and Majora’s Mask. The latter, overshadowed entry, brings a serious, dreadful tone to a console with mostly cheerful games. Graphics and engines from Ocarina of Time were reused but a smaller crew had only one year to produce the game. This didn’t stop developers from adding content, as players needed an Expansion Pak to play the game. Developers had some struggles with the transition from their previous entry, but this title still makes its own argument as a cult classic with Zelda fans.

Difficult to follow up Ocarina of Time, the development plan was to condense data, while still providing in-depth gameplay. This ideology eventually inspired the game’s three-day-loop sequence that finds players restarting progress, while still progressing. With help from the 1998 film Run Lola Run, this repeating sequence proved to be intriguing to gamers and critics alike. Furthermore, Majora’s Mask saw a lot of familiar faces from the previous Zelda game, producer Shigeru Miyamoto and composer Koji Kondo, for instance. Rushed to meet a short deadline, Majora’s Mask released worldwide in 2000.

Majora’s Mask finds the franchise protagonist Link tasked with saving an unfamiliar land Termina from the moon imminently crashing to the land below. While looking for a friend in the woods, Link is attacked by the eventual antagonist, Skull Kid. This encounter leads to Skull Kid transforming Link into a Deku. After the metamorphosis, Link meets a mask salesman who explains that the danger to Termina is because Skull Kid stole an artifact from him, the Majora’s Mask. Link then proceeds into Termina’s temples that span four regions, swamp, mountain, ocean and canyon. After defeating the boss in each region, it’s up to Link to reach the moon and Skull Kid to protect Termina from sure demise.

With the makings of a serious epic, Majora’s Mask delivers on almost every aspect of developed storytelling. First, it creates a controversial narrative, while leading to a clear outcome. The game also excels at implementing adult themes into the story. Loneliness, denial, and existentialism are just a few serious motifs the title touches on. Termina’s fate hanging in the balance of Link’s perplexing journey also makes for a learning expedition. Being Link and other characters allows the player to engage in Termina’s decadent and mysterious history. Complexities leave gamers wanting more narrative once completed.

From beginning to end, Majora’s Mask is a gripping action-adventure title. An inventory of over 30 items and at least 20 masks creates plenty of possibility during the player’s “three-day” journey. Situations call for different procedures, so every item could be handy at any given time. Some masks also transform Link into another species, allowing for different kits while remaining as Link. This provides an authentic experience, from character-specific dialogue to species-specific puzzles and fights.

The three-day cycle the game works on is another intriguing aspect. Players find themselves having to manage tasks within the period, as day three’s end sees the moon fall and a game over screen. Players learn songs to reverse time with drastic effect to progress, making the experience both tasking and tense. This unique styling remains the only one of it’s kind in the Zelda franchise. Pressing the player for time only adds a level of reality to Termina’s possible ruin.

Lastly, Majora’s Mask implements minor upgrades to help on your journey. In each temple, 15 fairies can be found and returned to their respective fountains for rewards. These vary from a simple spin attack powered by magic, to heighted defenses. This mechanic not only improves Link’s battles on his quest, it also allows players to explore with a lesser task to complete. Majora’s Mask offers plenty of side quests that are easy and fulfilling to the player, even with a bigger task at hand.

Majora’s Mask was one of three games on Nintendo 64 requiring the Expansion Pak. This advancement allowed for better lighting, smoother animations and cleaner textures. The aftermarket piece also allowed for less blur and more characters in visibility. This also allowed players to see further on the screen and into the game. The three-dimensional visuals made for an immersive experience for the time.

Longtime series composer Koji Kondo provided the soundtrack, and it features many similar songs and track themes to Ocarina of Time. It also features new material, separating it’s sound from Ocarina as well. The soundtrack features 112 pieces, each adding to the mysterious ambience that encompasses Termina. Kondo’s efforts mimic the tensity of the pressing time, creating vivid soundscapes throughout.

Having a unique three-day cycle within the game makes for interesting takes on replayability. The immersive story and compelling characters do plenty to bring adventurers wanting to relive the story once more. However, the three-day mechanic means players will have to replay certain segments for differing effects already, possibly making for a one-and-done playthrough. Conversely, players can enjoyably replay each boss battle without a new file by returning to the beginning of each dungeon. This allowed for endless hours of going toe-to-toe with Termina’s most vile evils.

Nintendo follows up arguably the best game of all time with another possible candidate in Majora’s Mask. Upon release, it saw reviews from critics similar to that of its predecessor. Inventive premises and dark themes saw the title receive critical acclaim. This Zelda title has always stepped to the darker side to separate itself from the shadow of Ocarina of Time. With 3.3 million copies sold worldwide, it is safe to safe Majora’s Mask paved a separate path.

In creating a separate legacy, Majora’s Mask fans have seen the game re-released on multiple occasions. In 2003, the Gamecube offered a collectors version of the game with a demo of the upcoming title, The Wind Waker. Since then, it has also been released on Wii and Wii U’s virtual console. Lastly, fans got an enhanced remake for the Nintendo DS in February 2015. Majora’s Mask continues to lure in adventurers looking for a rollercoaster of a journey. Though it wanders from the traditional hero trope of other Zelda entries, here is a title that offers an experience for those eager to dabble in something just a little more occult.