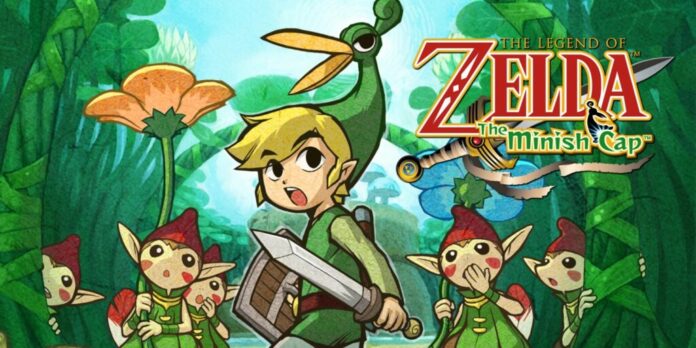 The Legend of Zelda stands as one of the most critically acclaimed video game series of all time. With a history that spans over three decades, the fact that it has maintained a high level of quality is incredible. When discussing favorite games within the series itself, some stand out more than others. A Link to the Past, Ocarina of Time, and Breath of the Wild tend to be the most common talking points. However, with a series that has enjoyed such longevity, it’s fair to assume that some titles will be overshadowed. One such example is the lone original Game Boy Advance title – The Legend of Zelda: The Minish Cap.

Released in Japan and Europe in 2004 and North America in 2005, The Legend of Zelda: The Minish Cap was published by Nintendo. However, unlike many titles within the series, The Minish Cap was developed by Capcom. This wasn’t the first Zelda title that Capcom produced; a few years earlier, they brought The Oracle of Ages and The Oracle of Seasons to the Game Boy Color. Capcom was also responsible for the GBA port of A Link to the Past, which also included an original multiplayer title known as Four Swords. Capcom-developed Zelda games had their own flair; The Minish Cap was no exception.

The Minish Cap was received well upon release, too. From IGN to GameSpot and beyond, The Minish Cap earned many high marks, with critics praising the game’s ability to blend classic Zelda gameplay with, for its time, a more contemporary visual style. Despite said high marks, when ranking Zelda titles over the years, The Minish Cap tends to be overshadowed by others in its series. This shouldn’t be the case, however, as it was very much the little Zelda that could. Here are a few key attributes that make The Minish Cap a portable classic.

Scope, Both Grand and Humble

The Legend of Zelda: The Minish Cap tells the story of a young boy dressed in green, who uses a shining sword to drive away the darkness. On the surface, this is usual Zelda fare, but the story proper begins once Link and Princess Zelda attend the annual Picori Festival in Hyrule Town. Vaati, a nefarious sorcerer, destroys the legendary Picori Blade and places a spell on Zelda, turning her to stone. In response, it’s determined that Hyrule requires the assistance of the Picori, also known as the Minish. The caveat is that this race of tiny people can only be seen by children. Thus, Link is summoned on a grand quest. He moves between worlds, tracking down the four elemental artifacts to restore the Picori Blade; this is the key to defeating Vaati and bringing peace to Hyrule once more.

The main gimmick in The Minish Cap is the ability to become the size of the mystical Minish. This is done with the help of Ezlo, a mysterious talking hat that also serves as Link’s guide throughout his quest. As a Minish-sized being, Link can see the world from the perspective of the Picori. Upon entering the Minish Village for the first time, the difference is evident. Small leaves to the perspective of a normal-sized human provide shade for the Picori. Additionally, they make shelter out of run-of-the-mill objects such as shoes and barrels. This level of perspective is undeniable; more so, it provides The Minish Cap with a whole different layer.

Perspective in The Minish Cap even extends to the game’s dungeons, too. Case and point, the Deepwood Shrine, the first true trial that Link must overcome as a Minish-sized hero. Deepwood Shrine starts normally enough until the player encounters what appears to be a barrel held by two support beams. For a normal-sized person, this would just be a standard barrel. However, a Minish-sized creature could walk inside said barrel, rotating it to access other areas of the shrine. This is just one example, but it speaks to the creativity that The Minish Cap brings to the table.

The two-world mechanic isn’t new in the Zelda series. A Link to the Past was the first game to truly utilize it via the Light World and Dark World. However, due to the stark contrast between the perspective of Hylians and the Picori, it can be argued The Minish Cap executed said mechanic better. Whether traveling along the rafters of houses or swimming through what would be shallow puddles to normal-sized people or evading raindrops as if they were meteors crashing to the surface, being Picori-sized felt as such. For perspective alone, The Minish Cap would be a Zelda title worth discussing more.

The Relationships Formed in The Minish Cap

The Legend of Zelda series is known for its cast of characters throughout various titles. Their personalities, motivations, and actions lend to their memorability. In other words, they will stick with the player long after the end credits roll. The Minish Cap is no exception, as evidenced by the various relationships that exist between different characters. In this game, many of the memorable relationships in question stem from the central character: Link.

In The Minish Cap, Link and Princess Zelda are friends. Across several Zelda titles, it’s destined that Link will meet the princess later, thereby forming a pact that will lead to the vanquishing of the great evil. However, in other titles, their friendship existed beforehand. Skyward Sword, Breath of the Wild, and of course, The Minish Cap are prime examples of this. This is evident early on; the game begins with Zelda going out of her way to find Link at his home, personally inviting him to the annual Picori Festival. This friendship provides that much more motivation for the player once Zelda is in peril and Link must traverse Hyrule to save her and restore peace to the land.

Another prominent relationship formed is the one between Link and the mystical wizard turned talking hat, Ezlo. Unlike more passive allies such as Navi and Fi, Ezlo is cynical and, at times, abrasive. Despite this, he is just as driven to defeat Vaati as Link is. Thus, he forms a fond with the young boy that develops throughout the game. As time goes on, Ezlo starts to see Link less as a helpless child and more as the hero he’s destined to become. In turn, Ezlo’s demeanor warms as he becomes that much more of an asset to Link and his quest.

Going Off the Beaten Path

Not unlike other Zelda games, The Minish Cap’s content extends beyond the main story. While the primary objective will remain the same, there exists a number of side quests that the player can get lost in. These quests will vary in terms of weight and rewards. Despite this, the fact they exist provides The Minish Cap with considerable value. In other words, if a player were to pick this game up during the mid-2000s, they would receive more than their money’s worth.

One such example is the litany of Blade Brothers that exist throughout Hyrule. If Link seeks them out, depending on his skill level, he will be able to learn new sword techniques. These allow Link to expand his offensive arsenal, from the Spin Attack to the Roll Attack to the Sword Beam and beyond. Granted, certain techniques require Link to either have a certain item or previously learned another ability. With that said, these abilities give the young hero the edge in combat.

Another sidequest comes in the form of the Mysterious Shells. Throughout the game, Link will collect blue seashells, either by opening chests, breaking rocks, or cutting grass. These can be redeemed at the Figurine Gallery in Hyrule Town. In return, the player earns figurines depicting characters and locations throughout the game. There isn’t much function to these figurines outside of aesthetics. Nonetheless, for those that have a penchant for gashapon or mystery capsule toy collecting, this is an enjoyable diversion.

However, the most prominent sidequest of The Minish Cap is the fusion of Kinstones. Throughout Hyrule, Link will discover colorful pendants that may be fused with similar-looking pendants that inhabitants possess. When these Kinstones come together, good fortune develops. This is done in many forms, including treasure chests appearing on the map, new characters arriving, and pathways opening to expand Hyrule further. Not unlike Mysterious Shells, Kinstones can be found in grass, beneath rocks, and within chests. This incentivizes players to check every corner for any strays.

There’s an inherently addictive nature to the Kinstone sidequest. While the player will start off struggling to find halves that can be fused with those of others, it won’t be long until more Kinstones are amassed. Before they know it, the player will have a healthy collection of Kinstones, which will encourage them to speak to each inhabitant of Hyrule to see if fusion can be done. The Minish Cap’s main quest will always take precedence, but depending on the player, this particular sidequest may take them off the predetermined path for some time.

The Minish Cap – In Closing

The Legend of Zelda: The Minish Cap is a title that can be discussed at length. At its core, it’s an incredibly solid title, from its graphical presentation for a handheld title to its smartly-designed dungeons and beyond. However, from this piece, the main takeaway should be that The Minish Cap is a gem that shouldn’t be overlooked. Even if one isn’t a Zelda fan, they may come away from this with the opinion that it is a solid action-adventure title.

The Zelda titles that are given the most focus these days are those that exist in 3D environments. The Breath of the Wild sequel is a great example; not only is it a follow-up to arguably the best Zelda game of all-time but one we know little about at this time. It’s safe to assume that Breath of the Wild will be the new template for most mainline Zelda titles moving forward. However, there is still a place for 2D adventures within the Zelda series.

Roughly a decade and a half later, The Minish Cap stands the test of time. It was, very much, the little Zelda that could.