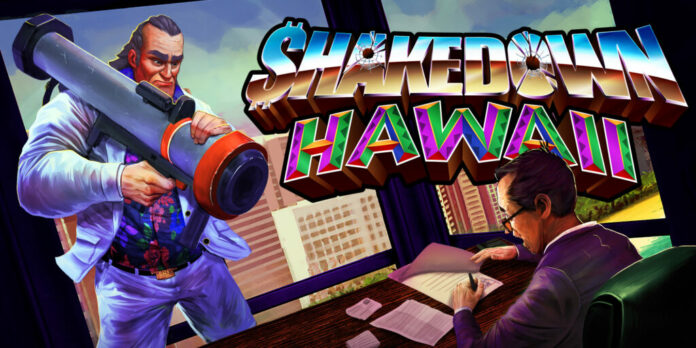 In some nice news, it has been confirmed that you will be able to Cross-buy Shakedown: Hawaii across the PlayStation 5, PlayStation 4, PlayStation 3, and PS Vita.  This means that a purchase on one console carries across to all the others so any PS4 owners who have the game will receive a free download on the PS5 version.

You Can Cross-Buy Shakedown: Hawaii But What Is It?

Great question!  Shakedown: Hawaii is an indie game by Vblank Entertainment and is a 16-bit parody of the Grand Theft Auto series.  Don’t just take it from us though.  Vblank’s website advertises the game as:

The entire island is up for grabs… or at least, could be with the right business model.

You are the CEO, and questionable subsidiaries, misleading ads, fine print, hidden service fees, and marketing spin are your tools of choice. Shakedown: Hawaii parodies big business, and the most absurd business practices that go alongside.

From the boardroom to the streets, build your corporate empire and destroy the competition.

The game’s retro styling gives it a unique look and feel to most modern games but it has all the action you could want from a game about taking over an island at your will.  While the game is coming to the PS5 on December 15th it is already out on a large number of consoles including Wii, Wii U, PC, Nintendo 3DS, and Nintendo Switch, as well as the aforementioned Sony consoles.  Vblank Entertainment has carved out a niche with these retro-styled games so if you liked Shakedown: Hawaii then check out their other release Retro City Rampage which is available on even more platforms.