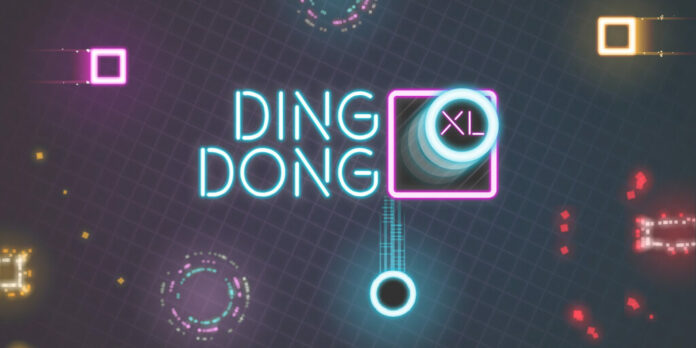 After two trips to the bargain corner for QUByte interactive games, we change it up and try out Ding Dong XL from Nickervision Studios.  The 2018 release is advertised as “…an addictive just-one-more-round” arcade-style game that only needs one button to be played.  This game is available for the low low price of just 99 cents.

As advertised this is an arcade game where you simply need to press the ZR button to move between two points on the screen.  As your score gets higher more and more obstacles make their way across the screen to try and end your game with occasional power-ups offering help.  All the while very catchy techno music plays in the background.

This feels like a mobile game, and that’s probably because it is.  As well as being available on the Nintendo Switch store this is a game that can be bought on any mobile phone and it plays like that.  The simplistic “one more round” style of gameplay is synonymous with a mobile phone game but it doesn’t really translate to the Switch.

Ding Dong XL plays very well, the visuals are nice, the music is catchy, there’s no lag to button presses.  Overall it’s a solid game that does what you could ask of a game without ever going beyond that, but it thankfully isn’t so ambitious that its a poor game.

It’s not likely, as we said this is a mobile game and while it’s probably a decent time filler for mobile gamers it’s not something we’ll be pulling up on our Nintendo Switch anytime soon.

If you’re an on-the-go gamer you may get more use out of this than we would.  That said, buy it on your phone instead and save some memory on your Switch.