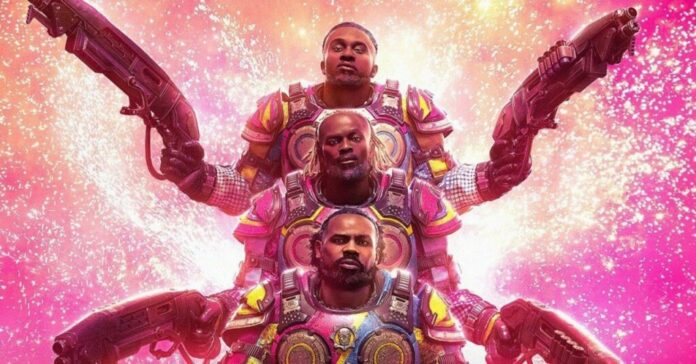 The official Gears Of War Twitter account announced that WWE Superstars The New Day (Kofi Kingston, Big E & Xavier Woods)will be playable characters in Gears 5 online gameplay.  Gears 5 is a 2019 release by developers The Coalition as the newest entry into the Gears Of War franchise which has found success as an Xbox exclusive franchise

Rev your Lancers 'cause it's a New Day!

Get them for FREE with @XboxGamePass Ultimate Perks or in the #Gears5 store! pic.twitter.com/Tq0qrV9JBR

The New Day is a faction-based around the power of positivity and how all three have put that to use to achieve their success in the ring.  The New Day is one of the longest tenured factions in WWE history and is generally regarded as one of the best ever alongside groups like D-Generation X.

The group are heavily decorated in the ring with nine tag team championship runs under their belt.  Kofi Kingston is also a former WWE Champion and captured the title at WrestleMania in the biggest win of his career.

This news will be a delight to Xavier Woods, who is an avid video game player who also operates a gain YouTube channel called UpUpDownDown where he has a number of series involving his fellow WWE Superstars including Superstar Savepoint, Retro Roulette, and Battle Of The Brands among others.

Get ready to have the power of positivity on your side as you control The New Day in Gears 5.