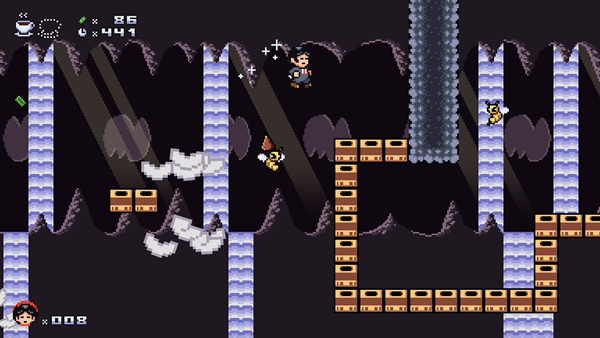 Salaryman Shi is an indie platformer that is coming to consoles in 2022. Before its release on the Nintendo Switch, a demo has been released to the Nintendo eStore. I decided to play the Salaryman Shi demo and give some quick thoughts on the experience.

Right off the bat, I got the sense that I was playing a Super Mario clone. And that’s not a knock on the game at all, merely an observation of the enemy patterns and placement of collectibles/boxes. The gameplay of the demo follows a very similar structure to that of Super Mario games with enemies in the way that can be jumped on, moving platforms etc. This stuff is all fairly well crafted. What then separates Salaryman Shi is the basis of my next point.

The use of the briefcase is very interesting to me. Having the ability to throw it and bounce on it, or boomerang it and access it as a platform open up some new avenues for this game that others can’t explore. Even in the demo, it’s clear that this mechanic is a key part of the game and what sets it apart from others. This deserves a lot of praise because in my experience shake-ups like this to the platforming genre don’t happen very often, especially at an indie level.

Now, my issue with this new idea is that I don’t think the game controls well enough to make it work. The controls, at least in the demo, felt very tight, too tight even. Platformers requiring any sort of trickery can never be too tight or the harder platforming just feels impossible or tedious.

As always, the aim of a demo is to entice a player to buy the full game.  Did the Salaryman Shi demo achieve this? I would have to say no. For as interesting as the ideas on display are, I never got the sense that this game would be fun to play. It’s possible that the full version will have more forgiving controls and it’ll be a great game but based on the demo, it’s not something I’m looking to get anytime soon.

Have you played the demo? If so let us know what you thought!
1
Share your thoughts on the Salaryman Shi demox

Dominic P (Editor)
Have you played the demo? If so let us know what you thought!" Read more »