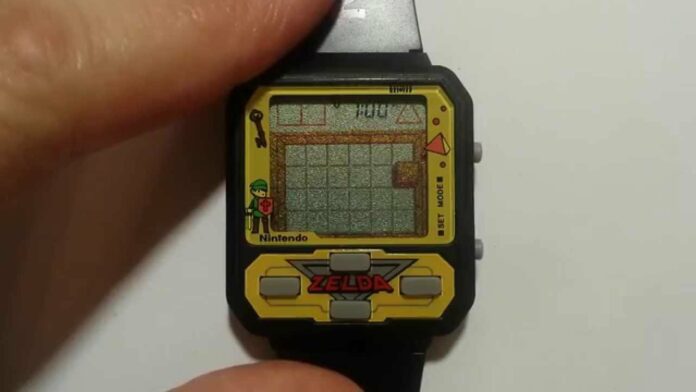 This week, I managed to get my hands on the vintage Zelda Game Watch. For those out of the loop or too young to remember, this was a video game that doubled up as a wristwatch. Released in 1989, it was a fairly common sight to see on the wrists of gaming kids back in the day. These days, they are available on eBay albeit they can sometimes be difficult to find at the right price. Remember, back then games weren’t as technologically advanced as they are today, so you shouldn’t exactly be expecting Skyward Sword-type graphics or much substance regarding the gameplay. Of course, you should also consider that this was effectively a mini-game on your wrist, so give it some credit and leniency where it’s due.

What was the story of the Zelda Game Watch?

The manual that used to accompany the watch states “Link enters a cave where he is immediately attacked by Iron Balls, Ferocious bats, and fire breathing Dragons.” Basically, the story behind the game is that like most Zelda games, Link has to find the Tri-Force. There are four levels that are represented by individual caves, with a dragon boss later on. As the manual hints, a lot of this game is based on dodging enemies throughout, and you can pick up weapons along the way. It’s simplistic enough, but also it was quite advanced for its time. Back then, this was released in the era of the Nintendo Game and Watch. Generally, the Game and Watch’s stories were far less advanced than the Zelda Game Watch.

How good was the gameplay?

As mentioned, the gameplay was basic but certainly good enough. The watch is divided into four buttons which act as left, right, up, and down. Because a lot of the play revolves around dodging, you will need to learn to use these buttons as quickly as possible. Elsewhere, there’s enough going on to keep you entertained. Because of the scoring system, you can go back and replay it again, in a bid to defeat previous high scores. By modern standards, don’t expect this to be an easy challenge either; sometimes the screen can get very full with enemies.

Another point that is worth noting is to avoid the trap of comparing this to the NES version. Zelda on the NES was released in 1986 and is night and day better than this game. It’s worth noting that this game was released on a watch and was licensed out to a different company to create the game, so it has very little in common with the NES version. You could argue that comparing a home console to a handheld is also very unfair in terms of memory, graphics, and general capability.

Obviously, there is a cap on the fun though as it takes roughly 5-10 minutes to complete. Again, it’s not exactly a masterpiece and is very much of its time. However, it shouldn’t really be judged against modern games either. By a similar token, if you’re a fan of the retro era, or Zelda in general then you may get a lot more out of this when compared to other gamers.

How good are the graphics and sound?

For a game released in 1989, the graphics are what you’d expect. Visually, they are similar to most LCD games from that era. This means you’ll have a bit of lag when Link moves side to side which is to be expected. The screen is blue, the enemies are black and it’s all 2D. Nonetheless, you’d kind of expect that given its era and if you view it from a less-is-more approach, then it holds up nicely.

Onto the sound, again it’s very typical for its time. In this sense, it’s the same as the Game and Watch soundtracks that use an 8-bit noise which is highly repetitive. In all honesty, this can get a bit annoying at times as it borders on monotonous. This would be my main gripe with the game as it grows tiresome quickly. Perhaps for the first 5 minutes or so it’s entertaining, but the novelty soon drops off. There is a simple solution to this though, which is putting in headphones and listening to music whilst playing.

Being completely upfront, if anyone is buying this to play the game in 2021, then you’re probably doing it out of nostalgic reasons. Not only this but it isn’t exactly cheap either, and can cost anywhere from $80-$250 depending on the condition. However, the price of retro games has been sky high for a while now. Regardless, it’s still relatively fun and if it brings back memories of a golden age, then why not give it a go? Yes, it may not have exactly been a game-changer in terms of storyline but it still holds a place in gaming history, and for that, it is invaluable for some people.

The Minish Cap: The Little Zelda That Could