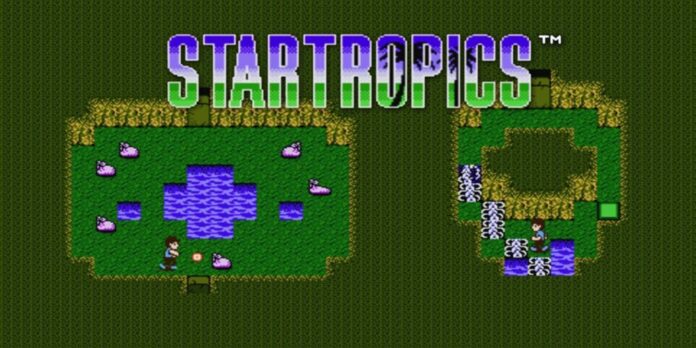 Gaming has a rich history that spans multiple decades. To this end, the Last Word on Gaming Backlog is a series that looks back on titles across all generations. From the golden 8-bit era to the landscape-changing 64-bit scene and beyond, The LWOG Backlog’s aim is history. This weekend, we take things back all the way to the 8-bit era to focus on one of the forgotten Nintendo games – StarTropics for the Nintendo Entertainment System.

Super Mario, The Legend of Zelda, Metroid, Kirby – these are just a few of the properties created by Nintendo. To say that Nintendo’s own creations exude charm would be an understatement. Even series that have gone largely forgotten, such as F-Zero and Earthbound, were kept alive through various appearances in Super Smash Bros. However, one property created by Nintendo that has seemingly been forgotten following the 8-bit era is StarTropics.

Heavily influenced by The Legend of Zelda, StarTropics has since become of the most underrated games on the Nintendo Entertainment System. Given its status as a forgotten classic, the fact that it’s a Nintendo creation makes this all the more puzzling. Don’t let this lack of attention from the company that brought the world Mario shy you away; StarTropics remains a classic. StarTropics was developed and published by Nintendo before being released in North America in 1990 and 1992 in Europe.

StarTropics stars a young boy named Mike Jones. He was invited to see his uncle, Dr. Steven Jones, at the tropical landmark known as C-Island. Upon arriving at Coralcola, one of the neighboring islands, Mike discovers that his uncle had gone missing. Now it’s up to Mike to scour the ocean to find his uncle. All the while, the young hero-to-be will be equipped with a magical yo-yo, allowing him to defend himself against the various threats that different locales present.

Granted, the story of StarTropics is nothing to write home about. While the game takes the player across multiple locations, it doesn’t become much more complicated than saving Dr. Jones. However, as the game progresses, the player will learn who’s behind the aforementioned disappearance. Not very many NES titles had gripping stories, so in the case of StarTropics, there is just enough narrative to keep things moving.

As stated earlier, StarTropics was influenced by The Legend of Zelda; nowhere is this more apparent than in the gameplay. As Mike, the player is armed with a yo-yo, which can be used to attack enemies, not unlike Link’s sword. During combat, players move on a grid-like terrain, which makes for snappy attacks and clever puzzles. The latter can be especially tricky, which make StarTropics an extra challenge. However, along with the yo-yo, Mike has other tools to shift each battle in his favor.

In addition to the yo-yo, Mike can exchange foes in combat with the shooting star mace, laser gun, and other such weapons. These vary in terms of power, and given that the game becomes especially challenging toward the end, it’s in the player’s best interest to become acquainted with all of them. Also, like Zelda, StarTropics features heart containers throughout the game, extending Mike’s life bar. Be on the lookout for these.

StarTropics’ gameplay was creative beyond a technical standpoint, too. Perhaps its most unique feature was the letter the physical game was bundled with. With this letter, written by Mike’s uncle, the player can discover a secret that’ll help them progress. To learn the secret, the player would have to dip the letter in water, revealing writing via invisible ink. Nowadays, one would have to learn the secret by looking up a guide online, but back in the early 90s, this was ingenious.

StarTropics came out later in the life of the NES, which is plain to see. Simply put, it’s one of the better-looking games on the system. On the world map, visuals are colorful, not unlike real-life tropical islands. When the player enters dungeons or areas where they must fight through, Mike and the enemies he faces are large and detailed. Seldom will the player have difficulty figuring out what they’re seeing. Nintendo made great use of the NES and its capabilities with StarTropics.

The same can be said for StarTropics’ soundtrack. The game’s upbeat vibe is complemented by the various music tracks played throughout the game. StarTropics has one of the more optimistic-sounding overworld themes; while it may not be anything grand on the level of Zelda, its cheery melody can’t be denied. The same can be said for the main dungeon theme; while different from the overworld theme in terms of tone, it’s catchy all the same. Graphics and sound are two other areas where StarTropics excels.

From beginning to end, StarTropics takes roughly seven hours to complete; this can be made somewhat longer if the player were to seek out every heart container or side item in the game. With that said, StarTropics isn’t the most replayable game on the NES. It doesn’t offer much outside of the main quest. However, for the time that a player spends with the game, the quest will keep them hooked. StarTropics is one of those games that will be worth revisiting once every few years.

Those unfamiliar with StarTropics, and have only learned about it through this piece, may be surprised to know that it spawned a sequel. Enter Zoda’s Revenge: StarTropics II, which was one of the final games released on the NES in 1994. The sequel continued the adventures of Mike and the game itself saw various improvements compared to its predecessor. Once again, Zoda’s Revenge was developed and published by Nintendo. It would also be the final StarTropics game.

As far as the original StarTropics is concerned, there were various re-releases over the years. These included the Wii and the Wii U via its respective Virtual Console services. Additionally, it was one of the thirty games on the NES Classic Edition, though Zoda’s Revenge was absent. As of now, StarTropics is a name that Nintendo has kept sealed away in its vault. It’s unknown whether Mike will make another appearance, either in his own game or even as a character in Super Smash Bros. Ultimate, but regardless, the original StarTropics is an overlooked classic deserving of more attention.